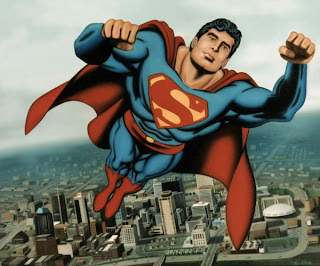 Dennis Cozzalio is not human.

Yes, yes-- I know there's a photo and an adorable drawing of "Dennis Cozzalio" on the "About Me" section of his blog, and this "Dennis" fellow looks like one of us, but c'mon:

2) "Dennis" has foolishly stated time and again that he is a Dodgers fan-- as clear an admission of alien sensibilities as you can get.

No, I have it on good authority that "DC" was actually sent from the planet Cinephilia, like Mork or WALL-E or Harlan Ellison, to observe with wide-eyed sincerity what we wretched humans have done with his species' impressive gift of movies, and to report back the evidence.

How else to explain that shimmering landscape he calls "Sergio Leone and the Infield Fly Rule"? Surely, no human could do what Dennis does. He might truly be the most remarkable figure in the film blogosphere: a creature of indefatigable energy and admirably broad tastes who (between family and work and who knows whatever other responsibilities) somehow manages to seemingly see everything, and to write about it with wit, grace, pasion and depth.

On top of which, he is as humble, and good humored as anyone you're likely to encounter on the Internets. Human? Please. Where's the bitterness, the jealously, the petty bitchy sniping at other bloggers? Where are the bad jokes, the uncomfortable TMI moments, the year-long political rants that other blogs don't hesitate to inflict? Honestly, the only time you see Dennis pop up in other folks' comments sections is to offer support, or to thoughtfully-- not childishly or trollishly or snarkily-- engage in a relevant argument.

Really. What the hell is that all about?

Nope, I'm not buying this David Bowie-like attempt to fit in. I'm here to rip the mask off, and to tell you that "Dennis" is our Kal-El, his goodness sent down to us to remind us all of what the blogosphere could be, if we only relaxed and engaged with our peers in a spirit of open, seemingly endless generosity. This "Dennis" fellow makes writing about film seem like a party, and everyone is invited.

As if to prove my point, "Dennis" has just hit another grand slam over at his place, offering up The Lo-o-o-ong Goodbye, his epic recapping of a year of filmgoing. Again, this being doesn't play by human rules-- he offers multiple top twenty and top fifty lists written with his inimitable panache, wrapped in sensuous images and even linked out to lengthier reviews he did of certain films earlier in the year. As if that weren't enough, "Dennis" also gives us his picks for "underrated" and "overrated" films, "Best of" categories for writers and actors, and even his daughter's best-of list. To say nothing of a couple dozen links to other folks' "Best of" lists.

Like I said-- not human. But gosh, are we lucky to have him. Mosey on over to his world, and find out why.
Labels: Blogging Dennis Cozzalio movies

Bob Westal said…
Yet in person, he is surprisingly human looking. Very deceptive.

Apparently, we met about a ten-15 years ago during the recording of a song for a Howard Stern contest (really). Oddly enough, he didn't even appear to me to be a cinephile at the time or else I would no doubt have buttonholed the poor guy for hours.

Brian Doan said…
Bob,
Interesting! What was the song you recorded?

Bob Westal said…
It was a parody of Blue Oyster Cult's "Godzilla" -- "Sternzilla," I believe.

Intriguingly, though it turned out great, that recording was ignored by the Stern crew. Meanwhile, a deliberately sloppy parody of the theme from the Jeffersons by some other guys I knew, made the top 10, despite sounding kind of awful. Apparently, they had Howard's tastes figured better. (And it wasn't like they couldn't have made it sound better if they'd wanted to -- that group was basically a close friend of mine, not really a pro musician but he's not bad, and also most of the Wondermints.)
January 23, 2009 at 6:03 PM

Dennis Cozzalio said…
Ho-ho! The truth behind "Sternzilla," revealed at last! Bob, I don't know if you have it, but I am certain if I dug through my old cassette tapes (Remember those? They were like reel-to-reel tapes, only contained in convenient little rectangle-shaped boxes) I'm sure I could find it. Thank God the engineer processed and overdubbed my vocals on that one, not that it did much good!

Brian, gentlemen, this bearded, bespectacled groundhog popped out of his hole a few days early, and together my wife and I discovered this post together tonight. I must say, this has to rank as one of the nicest, most humbling things I've ever read, both original post and ensuing comments. I'm really not sure what to say, other than you all have my most sincere thanks for your exceedingly generous and kind words. I’ve had occasion more than once to relate the circumstances under which I started writing my blog, and I’ll just say again that I went into this not really having a full comprehension of how the Internets really work, and like many of us who start little online hobbies like this I had no expectations for a readership of any kind other than the poor slobs in my immediate circle of friends and relatives who I could reliably berate into reading it every once in a while. (It’s worth noting that that particular audience is, these days, considerably diminished—other than my wife, you couldn’t pay anyone in my immediate family to take an active interest in SLIFR.) And many of those folks were quick to offer lots of advice about how no one would want to sit still long enough to read 4,500 words on movies I felt guilty about loving, or 2,500 words on this, or 1,800 on that. The advice was always along the lines of: keep it short, sweet, and don’t use too many big words, otherwise nobody will ever want to read it. But, however foolishly, I keep telling myself, don’t listen to that noise. I knew that no one was going to read the blog anyway, so why shouldn’t it be a place where I could do what I wanted, sans editor, where I could afford to not be concerned about whether the writing was too long or not? I just wanted the writing to be reasonably good, and to get better at it as I went along. I figured the people I would want to read my stuff would find their way to it as it was, if they were ever to find their way to it at all. And certainly nobody, least of all me, ever figured I’d still be writing the blog going on five years later—I honestly couldn’t conceive of that kind of commitment. I really thought that I’d have figured out a way to be tired and bored and burnt out on it all by now.

So reading something like your post, Brian, and your comments, Bill and Bob, especially during a time when I’m allowing myself to fret over trivial and dumb tangents like being able to post only once or twice a week—the current prolificacy average I seem to be able to muster during this period as I wrap up my student teaching—is a very real, unexpected treat; balm for my insecurities, to be sure, but also a giddy reminder of the quality of the friends and acquaintances I’ve made since this all started in 2004.

One doesn’t (or at least this one doesn’t) really write about one’s thoughts on movies without expecting indifference or even outright hostility— witness this summer’s series of Dark Knight-centered vendettas by folks who weren’t nearly so circumspect and coherent as Bill in their defense of the movie, or in their outrage when someone dared to diss it. And I certainly don’t write glowingly of movies like Speed Racer or Mandingo or 1941 and expect anyone to think I’m anything but disillusioned at best, deliberately, cynically contrarian or even plain ol’ boneheaded at worst. (And believe me, what minor reputation I might have as a reliable dabbler in film criticism has suffered in a couple of fairly high-profile places because of my championing of this year’s number-one pick, I truly believe that.) I’m just glad that there seems to be enough people out there (enough for me, certainly) who are tolerant of some of my preferences and seem to understand that it’s not about total agreement or bust. One of the neatest things about my blogging experience is something Brian touched on—I’m pretty proud of the fact that SLIFR still seems to be a place where people can say what they want without having to expect getting dumped on, either by the host or anyone else, and that a healthy degree of respect for divergent opinions seems to be a prevalent characteristic. I just wish that I could be as prolific in other people’s comments columns as I was in the beginning, but it seems that there’s only so many hours can devote to one’s cine-habit without at least giving the camel a severe backache. I love taking part in other people’s work; unfortunately, I read much more than I take part these days. Maybe now that things are loosening up a bit in my life the pendulum will swing back the other way again.

Well, before I rather typically go on too long (whoops—too late), let me just say that it’s my honor to count all three of you among my friends and that I would hope that one day, perhaps in times a little less unstable than these, we could all get together for a blogger’s convention of sorts and meet face to face. As he said, Bob and I have met a couple of times now and he has survived with his dignity intact (I did lift his wallet though—he didn‘t tell ya that, did he?), so I’d like to think that anything’s possible and that our paths might cross one day somewhere other than the ether. It’s been a long day, and I must say it couldn’t have been capped by anything better than reading this appreciative, far-too-kind post.

P.S. That drawing of me is pretty damn neat, isn’t it? My daughter has really developed into quite an artist, and I’ll always be proud of that little piece of work, especially because she takes such pride in it.
January 28, 2009 at 2:50 AM

Brian Doan said…
Hi Dennis!
I've only recently started flagging blog comments via email-- because I always thought once a post was off the main page, it kind of disappeared into the ether, comments-wise, and then realized folks were still finding blog posts sometimes days, weeks or months after they were posted, and I didn't want to miss communicating with them-- which means I didn't discover this comment until just now when I went to the post to double-check something.

Anyway, I just wanted to thank you for the nice comment, and to say once again what a great blogger and friend you've been. I hope all is going well!
March 16, 2009 at 3:05 PM