Via that cinephiliac internet detective Shaums (edit-- Of course, I meant "Shamus" (sorry, Shamus! And thanks to Jonathan for catching the typo), I learned of the new Martin Scorsese short on view above. It's for a Spanish wine called Reserva, produced by the Friexenet company, and it's a nine-minute homage to Alfred Hitchock, featuring Something New's Simon Baker in the lead. It's a stylish, funny movie-- Scorsese's deadpan "archivist" persona is both knowing self-parody and reminiscent of Mel Brooks (never have Scorsese's bushy eyebrows been used to more comic effect), and the various quotations and restagings are as sleekly intertwined as you might expect from our very best Film Geek (the cutting around the theater is also reminiscent of the dazzling opening of Scorsese's own, underrated adaptation of The Age of Innocence). In addition to Hitchcock, there's a hint of Michael Powell in the film-within-the film's opening, which pulls back from Scorsese saying "action!" through the theater, the orchestra by Scorsese still in view, back to Baker sneaking out of another room in the theater-- like the show-within-the-show in The Red Shoes, there's a vertiginous play with the bounds of reality that allows Scorsese to work himself into the diegesis of the very film he's shooting.

Such play suggests what really fascinates me about the film: not the various homages, but the conceit that what we're seeing is, in fact, a filmed version of an actual Hitchcock treatment called "The Key to Reserva." Adding that Borgesian step-- and taking the time to craft a fake script and a Christopher Guest-style mockumentary frame-- makes it more than just a work-for-hire ad or De Palmaish exercise; it allows Scorsese to cheekishly occupy Hitchock's cinematic body, to squeeze himself into the auteur's famous TV silhouette. "I hope people get the spirit of the film," Scorsese laughs at the end, giving up the ghost that what we've seen is real, while also making a punning reference to the alcoholic product he's shilling. But whose spirit is it? HItchcock's? Scorsese's? Mine? (Do I mimic Scorsese's riff on Hitchockian themes by linking-- quoting-- Shamus's riff (itself a riff, as he notes, on another blog post, and so on) on this subject, and riffing on it in another direction? Where does the chain of associations begin and end? And in what spirit should we take it? "Provided one ignores the text one is reading, one can practice Surrealist criticism," Andre Breton intuited more than 70 years ago, but imagining the false text, the film that lies might be another kind of useful criticism: one that's not plot summary or ideological attack, but its own creative gesture, a story in response to the story told. In that spirit, the key Hitchcock film might be one that's only glancingly referenced: Rope, whose editing and camerawork conspire to make a series of disparate shots look like one unbroken long take, one chain of images, an infinite relay of color, character and narrative shifting around an exquisite corpse. 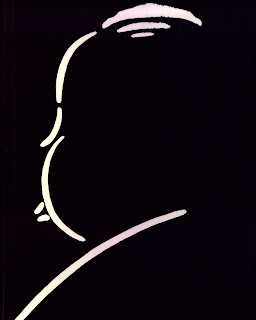 UPDATE: Bob, a blogger who runs the wonderful Forward to Yesterday site, mentioned in the comments that the clip above is in Spanish. I'll admit that I didn't watch the whole clip before embedding, and YouTube doesn't have an English language version up yet. As Bob mentions, you can see the English version at Shamus's site (or is that "Shaums?"), a great space everyone should be heading to on a daily basis, anyway. But since I went back to roam among "Scorsese" links, anyway, on the YouTube site, I thought I'd put up one of my favorite mash-ups, which reverses the flow of homage and quotation that the "Rivera" film plays with back to Scorsese, and remains the great imagined PBS movie:

Bob Westal said…
This looks very cool. Can't wait to see it...but did you know that YouTube link above is dubbed into, I think, Italian? The English language version is linked to over at the Shamus's place.
November 29, 2007 at 10:18 PM

Greg said…
Who Shaums? Anyway, as I said over at the Shamus, it's so great with so many great references that I couldn't help but think the opening title card, "New York City, 2007" should have read, "New York City, Friday, December 11, 2:43 pm."

Brian Doan said…
Spanish?? D'oh! That'll teach me to watch the whole YouTube clip before embedding-- I was just glad to find it there for posting. Thanks for the heads-up: I will head back and see if I can't find one in English (although part of me loves the idea of the Spanish as a further translation/riff on all the translations Scorsese's doing).

Greg said…
What a treat is is though.

Classic! I point out someone's typo and then finish the comment with one of my own. Oh yeah, and I wrote "Who Shaums?" not "Who's Shaums?" You'd think I would've read over my comment before clicking publish. You'd think. But you'd be wrong.
November 30, 2007 at 9:29 AM

Bob Westal said…
The movie itself really is remarkable. I'm a huge Hitchcock fan and everything in it is perfect -- I especially love the nefarious violinist's low-key exit!
November 30, 2007 at 1:00 PM

Brian Doan said…
Yeah, it's a really great film that makes Scorsese's debt to Hitchcock even more apparent (what they seem to have in common the most is not just an interest in suspense, but a control-freak, formalist perfectionism which serves them both very well).
November 30, 2007 at 6:37 PM