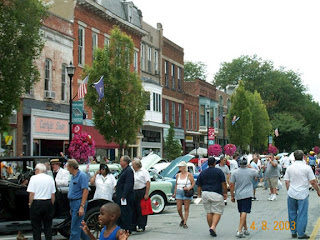 (In a serendipitous intersection with Jeff's interest in archives, the above image comes, via Google, from Heritage Ohio, whose banner declares "Preservation...Revitalization...Resource"). 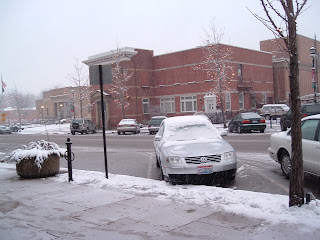 What does it mean to remember/discover our surroundings through such random image searches? How does the archive open and constrain us? Jeff writes of a desire to move away from literary models, away from the caption, which we might say nails things in place. He admits the difficulty of this move, but also expresses a desire for a "Barthes-ian punctum" that might break such a stranglehold. In telling you all this (and even citing where the images came from), I've already provided more than one caption, more than one interpretation to overcome (even as my own eye wanders to the kid in the first photo clapping, or to the license plates covered with snow in the second). So, now I'll shut up-- what do you notice in the images? What are your invisible captions?
Labels: Blogging Oberlin Photography Roland Barthes Theory Yellow Dog