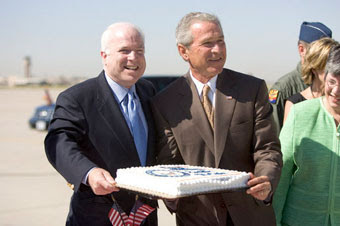 1) David Broder-- who, as Bob Somerby extensively documents, wrote a piece in 2000 mocking Al Gore's acceptance speech for having too many policy specifics-- is back at it in today's Plain Dealer. Broder stakes the claim that Barack Obama's Thursday night speech-- you know, the one seen by 38 million people, the one praised by the pundits, the one that gave him a ten-point bump in the polls-- was a tragic misfire:

The delegates left here happy and enthused, believing that the divisive nomination fight was finally behind them. But their star, Barack Obama, on the climactic night of the conclave, gave an acceptance speech that was no match for the keynote address he delivered at the 2004 convention in Boston....

No one is likely to argue that the speech here "changed politics in America." His jibes at John McCain and George Bush were standard-issue Democratic fare and his recital of a long list of domestic promises could have been delivered by any Democratic nominee....

f this were just an off night by a speaker we know can soar, it would be no more than a blip on the screen. Obama picked a bad night to be ordinary, given the huge crowd that filled the Denver Broncos stadium and the elaborate Grecian setting constructed for his performance.

Some Politics 101 for Mr. Broder: giving a speech as a surrogate is different than giving a speech as a nominee. Yes, Obama's high-flying rhetoric is a transcedent gift, but it's also what people like, um, David Broder were questioning as a deficit in the weeks leading up to the convention, throwing around code words like "lightweight," "celebrity," and "arrogant" to describe what they saw as a policy-lite candidate (as opposed to John McCain's substance). Had Obama come out and not offered a list of proposals or attacks, Broder undoubtedly would've called that a mistake.

2) Geraldine Ferraro likes Sarah Palin, and won't say who she's voting for this fall. So Team Obama's got that going for them. Actually, given Ferraro's own history of corruption and cronyism, her Palin support makes a lot of sense.

3) One candidate mobilizes supporters, while the other sees a photo op: you make the call. Part of me understands McCain's dilemma: he has to wash the memories of the GOP's epic fail on Katrina from voters' heads, and given that Minnesota looked like a PR disaster in the making (and the increasingly bad information about Sarah Palin), I'm sure scaling down the convention (and avoiding the green screen) had a certain appeal. Still, I can't help but remember Bush going to New Orleans to give that speech in the wake of Katrina in 2005. Stories reported that the power in that section of the city was back on, elating its residents-- who didn't realize it was only returning in order to power all the lights and cameras necessary for Bush's speech. Once that ended, the residents were thrown back into the darkness, an apt metaphor for the Administration's overall response, and perhaps a foreshadowing of what we'll see this week, too.

4) MoDo...there are no words. Truly. Except to suggest that in this passage, the deranged Times columinst practically screams her projections to her readers:

Americans, suspicious that the Obamas have benefited from affirmative action without being properly grateful, and skeptical that Michelle really likes “The Brady Bunch” and “The Dick Van Dyke Show,” reject the 47-year-old black contender as too uppity and untested.