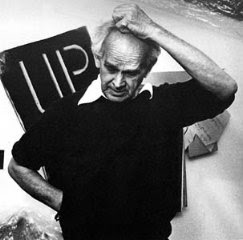 Good work usually arises when the creators... seem to have no ambitions towards gilt culture but are involved in a kind of squandering-beaverish endeavor that isn't anywhere or anything... It goes always forward eating its own boundaries, and, likely as not, leaves nothing in its path other than the signs of eager, industrious, unkempt activity.
-- Manny Farber

Via Glenn Kenny's blog, I found out that film critic, teacher and painter Manny Farber died last night, at the age of 91.

Along with James Agee, Pauline Kael and Andrew Sarris, Farber was one of a handful of American critics in the postwar era who transformed the way we saw cinema. He wrote for a variety of magazines and journals, including The Nation, The New Republic, Art Forum, and Film Culture, where his painter's eye for visual detail, his love of supposedly "disreputable" genres like the war movie and the B-level crime film, and his valorization of Hawks and Anthony Mann would all have a profound influence on the generation of cinephiles coming of age in the 50s and 60s. Above all, there was his writerly voice, best captured in the epigraph above, from his most famous essay, "White Elephant Art v. Termite Art."

In a very Bazinian way, Farber moves in this essay from an opening salvo about artistic reception--"Most of the feckless, listless quality of today's art can be blamed on its drive to break out of a tradition while, irrationally, hewing to the square, boxed-in shape and gemlike inertia of an old, densely wrought European masterpiece."-- that uses painting as its example, tracing out parallel traditions in that field before moving into his primary subject, the movies. In this way, he gets off a neat double play: he's able to suggest the manner in which critical traditions can calcify and harden (and can thereby stunt the growth of another medium when they are applied to it), even as his own deft, pugnacious utilization of interdisciplinary comparison suggests (as Christian Keathley and others have noted) a vibrant new critical alternative, one that, to borrow Farber's own phrasing on termite art, "feels its way through walls of particularization."