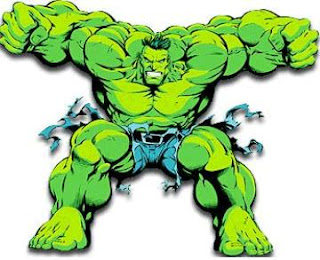 Choosing, as always, to tackle the tough issues, Entertainment Weekly quizzes the two Presidential candidates about their pop cultural preferences in this week's issue.

Obama's have been covered before-- he likes lots of different music, The Godfather is his favorite film, etc.-- although I was pleasantly surprised to see he enjoyed Jeff Bridges' performance in The Contender, a turn I think is vastly underrated. Really, though, the only revealing moment is when he names Spider-Man as his favorite superhero (working-class kid underestimated by the in crowd who turns out to have great powers and a sense of responsibility? Check).

McCain's, though? Well, that's like a roadmap straight to his id. Here's a partial list of his responses:

-- Favorite Superhero: Batman (a schizophrenic vigilante so haunted by his dark past that he's willing to cut a wide swath of violence in order to do what he thinks is right? Check. Oh, and McCain's line about identifying with the character's "frivolous playboy" side is also revealing).

--Favorite TV shows: Curb Your Enthusiasm (balding, psychotic former media star who takes out his anger on unsuspecting folks? Check), Seinfeld (fascination with trivia? Check), Big Love (Cindy's preference, but bigamy? Check), The Wire (OK, this one throws me, but maybe McCain thinks it's about something else?).

--Favorite Movie: Viva Zapata!. I haven't seen this, shamefully, but the IMDb description does have some resonance with aspects of McCain's career:

In 1909, Emiliano Zapata, a well-born but penniless Mexican Indian from a remote province, Morelos, comes to Mexico City to complain that their arable land has been enclosed, leaving them only in the barren hills. His expressed dissatisfaction with the response of the President Diaz puts him in danger, and when he rashly rescues a prisoner from the local militia he becomes an outlaw. Urged on by a strolling intellectual, Fernando, he supports the exiled Don Francisco Madero against Diaz, and becomes the leader of his forces in the South as Pancho Villa is in the North. Diaz flees, and Madero takes his place; but he is a puppet president, in the hands of the leader of the army, Huerta, who has him assassinated when he tries to express solidarity for the men who fought for him. Zapata and Villa return to arms, and, successful in victory, seek to find a leader for the country. Unwillingly, Zapata takes the job, but, a while later, he responds to some petitioners from his own village with no more reassurance than had Diaz years before. Realizing that with power his idealism has gone, he returns with them to Morelos - specifically to investigate their complaints against his brother Eufemio. New leaders take his place, and, egged on by the always surviving Fernando, they decide that Zapata is a threat to their regime.

Still, credit to McCain for crying at Bambi (especially as that might cost him some NRA supporters), and for enjoying the new Indiana Jones film-- that last choice might be the only truly "maverick" opinion he holds this year.