Smash-Mouth and The Rising 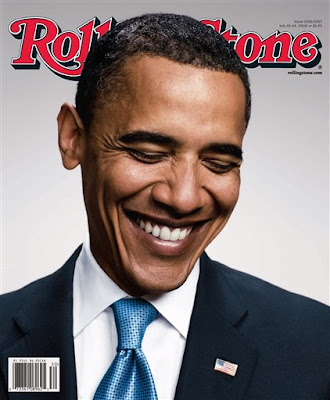 They played Springsteen's "The Rising" after Joe Biden's speech tonight, the latest in this evening's menu of sonic nostalgia: Clinton's Fleetwood Mac song, U2's "Beautiful Day" (which played following Kerry's speech in '04), and now Bruce (perhaps a memory back to his 2004 election tour). Recorded and released after 9/11, The Rising was Springsteen's response to that trauma, his affirmation of hope and community in the face of terror and destruction. I'm fairly certain the metaphorical return to that moment is no accident: Team Obama must know that, in addition to reminding Dems of one of their favorite liberal rockers, the song also acts as a subtle indictment of the squandered possibility of that moment, and what it might mean to try to rebuild the community of hope Springsteen constantly envisions.

I never thought I'd hear a presidential candidate say, as Barack Obama did tonight of Hillary Clinton's speech, that someone "rocked the house." That makes me feel good: it signifies a generational shift in the same way that the '92 Dems showing up on Arsenio Hall did, but it's also a reminder that this is a candidate supremely comfortable in his own skin.

There seemed to be an outbreak of tsuris-- exacerbated by the piss-poor cable and network coverage-- among some of the progressive blogs that there weren't enough attacks on McCain at the convention, that there was too much concentration on fluff and personality. Well, I would imagine any such fears were laid to rest tonight: from John Kerry's strafe bombing of McCain's foreign policy record; to the heartfelt testimonies and critiques of various service personnel; to Bill Clinton's catalogue of Bush-era malfeasance, tonight's speeches built on Hillary Clinton's critique last night, until Joe Biden came out and led a chant of "more of the same!" while angrily nailing failure after failure. Biden's speech was interesting-- he faced the same issue Al Gore did in '92, of being a well-known public official who nevertheless had to (re)introduce himself to the American people, while also playing the attack dog role expected of the VP. Biden seemed a bit nervous at first, perhaps concerned that his infamous reputation for logorhea might get him in trouble. There were moments when he stumbled and stuttered; but he also found ways to improvise and use those moments, telling stories of a childhood stammer that forced him to defend himself against bullying attacks (which became a metaphor for battling the McCain campaign), and echoing John Kerry's slip of the tongue (both Kerry and Biden mentioned McCain meant Bush) by calling it a "Freudian slip." At first, I thought he was spending too much time on the personal stuff, as well-written and touching as it was, but by the end he'd built to a rapturous indictment of the policy failures and destruction of hope of the last eight years, finding a way to fold his personal story back in and reminding us that we all have personal stakes in public policy.

That kind of slow build-- what dday, over at the Digby site, has been calling Obama's "long game"-- was a hallmark of this convention, and really of many of the recent decisions of the Obama campaign. Monday was the easing in, the reintroduction of the candidate after a couple of weeks away. Tuesday was the Clinton catharsis and reunification of the party. Having come back together, tonight everyone trained their sights on McCain, and smash-mouthed the hell out of him (I'm still buzzed). And tomorrow, having smacked around the opponent, the convention turns back to the candidate, and his vision for change.

It's not an immediately apparent structure, and its slow build clearly drove some people crazy (as does Obama sanguine response to shifting poll numbers). But I find myself pretty impressed; the thought I have now is, "These people know exactly who they are, and exactly what they're doing." Slowly building a ground-up community, internet and voter registration network is a risk because the potentially huge electoral payoff isn't immediately visible. Choosing Biden was a risk because there was no immediate political payoff (as there might have been with Clinton). Delaying the McCain bashing was a risk because it might make your supporters antsy. Speaking outside tomorrow is a hugely scary risk because of all of the logistical things that could go wrong. But it all suggests to me that Obama has kind of cool confidence in himself and those around him, derived not from the wealthy frat-boy arrogance of Bush (the calm assurance that Daddy will always bail him out), but because he and his staff have worked their asses off, and have seen it all pay off so far. It's rather thrilling, it's kind of bad-ass, and I'm fairly certain that we used to call it "leadership."

pc said…
Spot on post. I've already emailed it to some of my Barack supporting friends and they really liked it and agree. *** Odd story: I was teaching a class in downtown Chicago just before Barack declared his candidacy. The windows in the classroom faced the street and I looked outside and who was leaning up against the window but Obama. He was there for about 10 minutes by himself. It was horribly distracting. I was awfully tempted to run outside and ask him if he wanted to address the class. Alas, I didn't.