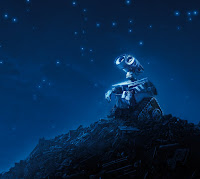 WALL-E is preceded by a five-minute cartoon short called "Presto," and a glimpse at this disappointing piece is revealing. There's nothing objectionable about "Presto," except that we've seen it all before-- its tale of an imperious magician and his impish, trouble-causing rabbit recycles tropes and imagery from any number of other cartoons, notably the Bugs-and-Elmer face-offs in 40s Warner Brothers cartoons. But "Presto" lacks the breakneck, intertextual verbal pyrotechnics that make those old Looney Tunes pop (in fact, "Presto" has no dialogue whatsoever); the rigorous visual order and balance that CGI seems to encourage means that there's no real sense of the world about to collapse-- what, in a more serious vein, Jean Renoir called "dancing on the edge of a volcano"-- from which so much of the lasting delirium of those older cartoons arises. If you'll pardon the pun, this cartoon tale of magic gone awry just feels old hat.

I thought of that watching WALL-E, a much better film than "Presto," but one which suffers from the same sense of visual, narrative and thematic recycling. In the case of WALL-E, this structural flaw is both more manageable (the film is often touching, and generally stunning to look at) and ultimately more annoying, since the whole narrative hinges on a sentimental diatribe about man, machines and apocalypse that would've felt twice-told in the 1930s. I love Pixar movies (the excrable Cars excepted), but I'm not always sure what to do with their chronic nostalgia. The best Pixar films-- Toy Story, The Incredibles, Ratatouille-- use nostalgia as what John Seavey might call a "narrative engine," centering a remembrance of a lost past as a starting point for creativity, growth and affirmation (the past as booster engine to the future-- "To Infinity and Beyond!"--, rather than anchor tying one down). Cars failed precisely because of the filmmakers' disingenuousness: its incessant, reactionary longing for a small-town 50s jarred against its computerized mise-en-scene, a look that could only be achieved through the very progress the film protested. It was the animated equivalent of Frank Capra: a paean to a kind of rural existence that its makers had no intention of ever embracing in real life.

WALL-E at least moves its reference points up a decade-- 60s touchstones like Hello, Dolly!, 2001 and the Apollo 11 probe are woven into its futuristic visions (and the whole story seems derived from late 60s/early 70s science fiction fables like Silent Running and Soylent Green). But it, too, can't overcome a sense of neo-Luddism about humanity and the future.

Have you ever seen those "TRUTH" commercials on television? When I lived in Florida around the turn-of-the-century, I was innudated with those ads-- and honestly, their combination of smug moralizing and obvious jokes really made me want to smoke. Call it the Cultural Studies Problem: an immense apparatus that utilizes a great deal of complex material and specialized language to tell us something we already know, and to do so in the most heavy-handed ways possible. 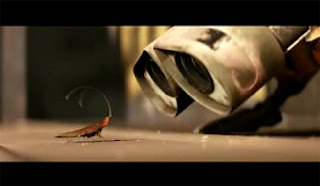 WALL-E encounters this problem in its middle section, both the narrative and thematic heart of its entire operation. Briefly: 750 years in the future, Earth has finally been laid to waste by political and corporate profiteering. It's now a vast, trash-ridden wasteland, and what remains of mankind has taken off into space to live on gigantic intergalactic cruisers that pamper to their every need. The only beings left on earth are a loveable trash-collecting robot named WALL-E, and his cockroach companion (the film's best jokes are the ones, like that roach, that don't speak out loud). WALL-E has spent centuries compacting the vast amounts of trash into cubes which create skyscraper-like towers (a brilliant trompe l'oeil is that we often can't tell the difference between WALL-E's edifices and the man-made kind). He also scavenges and saves various items, like Rubick's Cubes, light bulbs, and an old VHS tape of Hello, Dolly!. He's rather lonely, until one day EVE, a probe robot with a wicked laser arm, lands on Earth to explore. WALL-E is smitten, and she slowly returns his affections, but when she discovers WALL-E's tiny plant-- the first sign of life on the planet in years--she sucks it into her bosom, shuts down, and is called back into space. Not willing to leave his love, WALL-E grabs onto her spaceship and follows her back to the star cruiser.

It's when we reach the cruiser that everything starts to fall apart, primarily because the jokes are much like the obese passengers on the ship-- they're heavy, but have no depth, and no sense of how hypocritical and insular they actually are. Holographic billboards and computer screens scream jokes about conglomerates; we see the lazy humans (oh, the humanity! Or as the most laughable line in the film put it mournfully, "Oh, WALL-E!") travel around in high-tech wheelchairs that save them the trouble of walking, and allow them to be constantly plugged into the 27th century version of the internet. It's a Love Boat parody, but it carries no sting because it has no empathy-- director Andrew Stanton might as well have followed through on the silent movie ethos he deploys elsewhere, and tossed up title cards that said "Sloth" and "Irony." The middle section isn't a complete loss-- Jeff Garlin is actually quite touching as the ship's captain, and I liked the extended parody of Dr. No when WALL-E and EVE arrive in the ship's "decontamination" wing-- but it is a lost opportunity. Why the excessive hectoring? The single entendre vision of a dystopic vision? Is there nothing in this high-tech universe that the filmmakers find attractive? 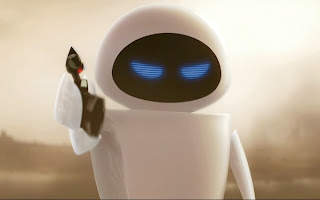 More to the point-- do they realize how attractive it looks on the screen? Yeah, yeah-- I understand the thesis (or the AXIOM, as the ship is called-- a joke which carries a double-edge the filmmakers end up being cut by). But look at this place! It's like a combination of Star Wars, Miami and Tokyo, and I'd be lying if I said its bright plastic surfaces weren't alluring. Stanton and his crew have used their high-tech tools to create a high-tech playground-- and then turned around and criticized us for looking at it. Those passengers are marked as dullards, but their interconnective multitasking is precisely the skill you need to absorb WALL-E's catch-the-reference weave of silent comedy, Broadway musical, Star Wars and Kubrick (to say nothing of E.T., which the whole narrative can be read as an inversion of). That kind of rhetorical jujitsu can be effective (see Brecht or the Surrealists, among others), but when it lacks true irony or dimension, it's as thick as the fingers of the passengers the filmmakers make fun of (even as those passengers are mocked for doing what the film wants us to do-- stare passively at a screen).

For all of that-- all of its rhetorical failures, its dissonant longing for a hippie paradise even in the midst of the 21st century, the ways in which it panders to an exhausted nostalgia that it shrewdly knows a large swath of its audience will lap up like buttermilk-- there's a lot to like about WALL-E. Its opening scenes deftly combine high-tech camerawork and lo-fi recording to create a space of longing and lyricism that's immensely affecting, and they manage to sustain that tone for the first 35 minutes or so. As many others have noted, those early scenes on Earth owe a lot to Chaplin, not only in their silent comedy slapstick and romantic goo, but in their striking combination of state-of-the-art cinematic imagination (I don't know that I'll see more sweepng tracking shots all year than those that open the movie) and addiction to an almost Victorian sentimentality and distrust of the future (it's the great paradox that those Chaplin and Griffith films present, and it's fascinating to see it replicated with new technologies). I loved the first half-hour of this movie because it hadn't yet tied itself down to its thesis, and offered a rare unpredictability-- I sensed where the narrative might go, but still managed to be surprised by bits of business along the way. It's in those moments that the film best represents WALL-E's curiosity and open-heartedness, and shares it with the audience.

Chaplin famously noted that “Life is a tragedy when seen in close-up, but a comedy in long-shot.” For all of its underheated satire, WALL-E understands this in its bones (pixels?), and it's this understanding that makes the film's final scenes so powerful: they don't shy away from the remarkably expressive eyes of the title character, or the fascinating combination of melancholy, hope and unsettled desire they convey. 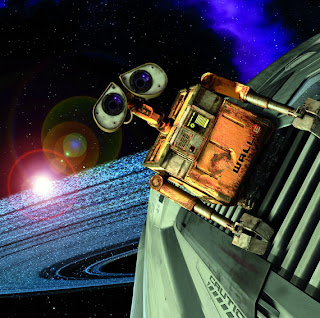