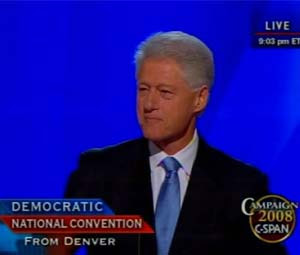 The former president that firedoglake refers to as "Big Dawg" just finished his speech, and now the wife of a Marine is speaking on stage (she's actually really good-- smart and passionate, and there's something nice about the unpolished style in the face of all the professional politicians onstage. This seems like foreign policy night-- Clinton talked about it in his speech, and following his talk, two former high-ranking military officers gave speeches talking about service, Iraq and torture, nicely summarizing touchy issues and lending the critiques the imprimatur of military knowledge).

There's something surreal about the idea of Bill Clinton as party elder statesman-- the picture on the FDL blog looked like it dated from '92, but that Bill Clinton is long gone, replaced by the wry, white-haired man who would almost be a ghost if he didn't retain that core of intelligence, wit, rage and charisma that powered him through two terms. He remains the most brilliant politician of his generation-- the smartest, the wonkiest, the most gifted in both policy and emotion-- but the irony of his '92 theme song, "Don't Stop Thinking About Tomorrow," playing behind him as he entered the stage couldn't be missed: especially after his antics in the primaries, this speech would have to act as catharsis, mea culpa, affirmation of support and graceful exit/benediction.

That's a tall order, and I think he mostly came through, even if it wasn't as much of a barn-burner as I would've liked. Clinton's speech lacked the emotional electricity and connection of Michelle Obama's on Monday night, or the sweeping tie of policy and emotion that Hillary Clinton's did last night. That's to be expected-- he doesn't have the direct emotional connection that Michelle does, nor the emotional stake in this year's election that Hillary did. And I can't help but think he had the good sense to tamp down some of his own rhetorical magic, so as not to outshine the nominee this year (as he arguably did to Gore in 2000). The speech wasn't as warmly funny or cutting as his speech in support of John Kerry in 2004-- there seemed to be, in his speaking, a slight sense of wariness after the bruising primary season, and perhaps some lingering paternalism: the constant affirmation of what Obama will do was nice, and accurate, but sometimes came across as calming reassurance rather than sheer bloody endorsement (I don't know what to think about the explicit endorsement of Obama's "Commander-in-Chief" credentials-- it's nice, and I know it's necessary given the attacks on Obama, but I wish it wasn't necessary, as it frankly feels condescending).

Clinton seemed most comfortable when talking about himself and his administration's successes, and when talking about Hillary's race for the nomination: there, his humor and gift for making each person in the audience feel connected to him really shone through.

He was also very good at noting the dozens of policy failtures-- both foreign and domestic, from the economy to AIDS to Katrina to torture to taxes to corporate cronyism. Talking about complex ideas in comprehensible ways, without reducing their complexity, is something Clinton has always been good at-- it's one of the things that made 1992 such a fun election year. Here, his lingering need to keep talking about his own accomplishments really paid off-- he could draw a clear contrast between his eight years and the last eight years, while tying the best aspects of his administration to Obama's future. It was a deft use of nostalgia, and precisely what Clinton should do on the campaign trail. His warm endorsement of Joe Biden also acted as subtle way of diffusing whatever lingering PUMA nonsense about the VP slot might still be making the rounds.

What shouldn't Bill Clinton do on the trail? Talk about John McCain's honor. Talk about how John McCain is his friend. Talk about how he's a good man who loves his country. Look-- I get wanting to be positive, and I understand this is a tricky meme for the Party, who don't want to alienate independent voters. But I'm with Josh Marshall: these paeans to McCain have to stop. He's not a good man, and whatever "honor" he might have once had, it's long since been squandered on pandering to the worst aspects of American political culture these last eight years. Just let it go, and don't do the GOP convention's work for them.

As I typed this, John Kerry spoke onstage. Rhetorically, he's Bill Clinton's opposite-- slightly monotone, physically awkward, occasionally slipping on his punchlines (although he got off some good one-liners, self-deprecatingly referencing 2004 attacks on his supposed "flip-flopping" and turning them on McCain-- "Talk about being for it before you were against it. Before John McCain debates Barack Obama, he should finish the debate with himself"-- yes). But his intelligence and passion are clear, and his sharp, debate-style slash attacks on McCain's policy blunders and character attacks suggest that his 2004 loss liberated him to once again become the speaker he was in 1971. I can't really explain why I find his speech so touching, despite the occasionally wincing verbal trips on words. Maybe it's just because John Kerry just comes across as a tough, decent man, and as such, an apt surrogate for this year's candidate.

UPDATE #1: Steven Spielberg's film about the vets is very touching-- smart, full of good anecdotes and hitting all the right notes about the meaning of military service. But man-- I groaned when Tom Hanks appeared at the end. Good guy, good actor-- but can we get over this notion of Hanks as our national spokesman, please?

UPDATE #2: Iraq War veteran Tammy Duckworth (who also acts as the Illinois Veterans Affairs Department Director) is giving one of the best speeches I've heard at the convention so far-- smart, moving, both personal and policy-driven, and utterly demolishing the false jingoism of Bush-McCain (love the line about "a borrowed flight suit"). Her presence on the stage mocks all of the false machismo of the last eight years, and her forthright manner of speaking is a simple reminder of the real meaning of patriotism.
Labels: Bill Clinton Election '08 Hillary Clinton McCain Obama Politics Steven Spielberg