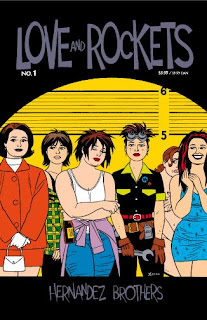 -- Sitting in Casa Fiesta last night, waiting for a to-go order of tasty tacos and enchiladas, I heard a familiar melody with a Spanish lyric. It took me a minute to place it, then I realized it was The Beatles' "If I Fell," done in a tight, almost pop-waltz arrangement full of yearning vocals and Spanish guitar. Good stuff, and I really wish I'd thought to ask what the CD was. It was a striking moment of cross-cultural exchange, appropriate on a day when two voiumes of Los Hernandez Bros' Love and Rockets collections came in the mail from Amazon (The Girl From H.O.P.P.E.R.S. and Human Diastrophism, for those of you keeping track at home). If you've never read Love and Rockets, you owe it to yourself to check it out-- with its funky mixture of romance, humor, science fiction, autobiography and cultural critique, it's a model for crossing borders: be they physical, emotional, or generic.

I am unpacking my library. Yes, I am. The books are not yet on the shelves, not yet touched by the mild boredom of order. I cannot march up and down their ranks to pass them in review before a friendly audience. You need not fear any of that. Instead, I must ask you to join me in the disorder of crates that have been wrenched open, the air saturated with the dust of wood, the floor covered with torn paper, to join me among piles of volumes that are seeing davlight again after two years of darkness, so that you may be ready to share with me a bit of the mood - it is certainly not an elegiac mood but, rather, one of anticipation - which these books arouse in a genuine collector. For such a man is speaking to you, and on closer scrutiny he proves to be speaking only about himself...Every passion borders on the chaotic, but the collector's passion borders on the chaos of memories. More than that: the chance, the fate, that suffuse the past before my eyes are conspicuously present in the accustomed confusion of these books. For what else is this collection but a disorder to which habit has accommodated itself to such an extent that it can appear as order?

I think of Benjamin every time I visit those excellent folks at the Infinite Monkey, whose comic-covered walls seduce me into buying new items every Wednesday, even if I still have stuff at home from last week that I haven't gotten to yet. At the moment, there are small stacks on my living room floor of the material that piled up in the six weeks I was away, everything from reprints of Peter Bagge's Hate to the latest issue of Final Crisis. Its size and scope both calls to me and mocks me at the same time. Monkey's co-owner, Josh, was saying today that there comes a point at which you can't possibly read everything, whatever your desires, and you're sadly forced to choose and narrow down your options. True, but comics collecting (or any sort of collecting) isn't just about reading (or watching, or listening, or whatever the item provides), but for me is wrapped in precisely the flow of knowledge, nostalgia, remorse, anticipation and fetish that Benjamin writes of above. I can write it off as research ("Oh, I'll be teaching the comics course again in the spring, and should really read this..."), which is partly true, but if I'm honest, it also intersects with those elements (shininess, gloss, materiality of the word and image, the thinginess of the thing) that academic critique often asks us to distrust (even as it erects new theoretical objects and ideologies for us to fetishize instead: as Stan Lee himself asked, "To Save You, Why Must I Kill You?"). The ways in which comics reorient not only our reading but (perhaps, or for me, anyway) our understanding of our relationship to the object is partially what makes them (and cinema, and fashion), so interesting to me (they mess with our preconceptions like that Beatles cover I mentioned above).

All of this is Watcher-style prelude to saying that y'all should expect comics reviews sometime in the near-future, perhaps a multi-part epic in the Mighty Marvel Manner, full of excitement, pain, heartache, melodrama, unexpected death and a lesson-laden happy ending. Also-- witty editorial boxes.

-- Speaking of fetish: I'm only two episodes into the Season One box, but I think I can safely say that Mad Men will become my new television obsession. 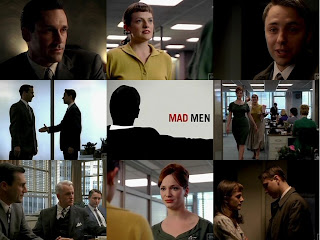 The writing is sharp, taking its time to reveal character, and smartly complicating and confusing even as it clarifies: even with the temptation to make heavy-handed, smug post-hoc critiques of America's past (a la Alan Ball), I never feel preached at, although I often feel mortified by the show's rightly-casual-for-the-period use of gendered and ethnic epithets. The acting is fantastic, the direction is smooth, the whole thing is unfolding like a lost Vincente Minnelli movie (as written by Billy Wilder); but honestly, none of that could be the case and I'd still watch it to see the sharp suits, sleek 50s automobiles, and garish middle-class homes; to listen as the hustle of the dialogue is enveloped by the clink of martini glasses, in turn framed by the Sinatra on the soundtrack; to be carried, not to a documentary re-creation of 1960, but to a very knowing and self-aware simulacra, whose very delight in its artificiality makes it the show's most ironic and ambiguous commentary on the power of advertising.

--Speaking of images, Toby Keith is certainly burnishing his, isn't he? Between that, this witless Regina Brett column, and John McCain getting, in the words of the Calgary Herald, "pwned" by Paris Hilton, it seems the Obama campaign is really driving the wingnuts 'round the bend. Can hardly wait for the debates.

--Have I seen The Dark Knight? Yes, yes I have. Will I blog about it? Yes, yes I will (hopefully before the weekend's out). Do I find the hairpulling/condescension over the film's violence and "messages" ironic since it's coming from some of the same critics who wet themselves in praise over the supposed "depth" of There Will Be Blood? Yes, yes I do.

-- Speaking of the weekend, here's the film I'm most looking forward to (and no, I'm not being ironic, not even in that Alanis way):