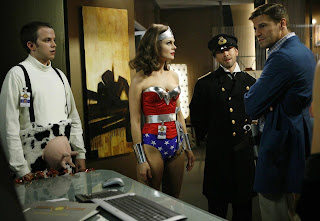 The image above is something of a test: you either laugh at it, or you don't. I think it's a pretty funny image in and of itself, but also suspect the humor derives, in large part, from your knowledge of the show, and what it means to see Bones dressed as Wonder Woman, or Zack sporting an udder. By now, Bones relies on our familiarity with the show's characters as much as our interest in the increasingly tenuous mystery plots. I think that's good-- it's what distinguishes the program from more antiseptic offerings like CSI, the Hard Rock Cafe franchise of television drama-- but as this episode also proves, it means when the portrayals are a little off, it sticks out like the tape on David Boreanaz's glasses.

I missed last week's episode (and when I heard it guest starred John Francis Daley, of Freaks and Geeks fame, I kicked myself), but Bones' quirky mixture of arc and standalone structures means I didn't feel like I missed too much continuity-- Bones and Booth are still bickering, Angela and Hodgins are still searching for her surprise husband, Zack is still intermittently grappling with his Iraq experience, and Camille remains the show's most frustratingly underused character (nice Catwoman costume, though). The show is still full of witty moments, many of them involving Booth's mixture of confident tough guy and adolescent geek (loved, in the pre-credits sequence, how he ran through the hay maze walls like a linebacker, then gave a little boy shrug-and-grin to Bones). The revelation of Booth's clown phobia was cute, and nice tie back to last season's ice-cream truck shootout. Interesting, too, to learn that Bones (like her cinematic doppelganger Indiana Jones) is afraid of snakes. Fear was a common thread to this week's subplots: childhood fears surrounding Halloween, Angela and Hodgins fear of the "boogeyman" missing husband that will continue to haunt them, Zack's fear of making "intuitive leaps" (kudos to Eric Millegan for making his character's tightly-wound stuffiness poignant) and lingering PTSD about his time in Iraq, and Camille's fears of powerlessness, expressed through the defense of her Catwoman costume as "one of the most powerful superheroes." While the mysteries continue to be mostly McGuffins, this one was a step up from the convoluted "pony play" of two weeks ago, and served its main function of kicking the character relationships into high gear.

Here's my fear: that some of these character traits could become tics, rote weekly restagings of typology rather than the rich interaction and development we saw in the first two years. And a bigger fear: what's up with the increasing sadism of our heroes? We know that Bones has a secret gun fetish, and Booth is a haunted, occasionally violent soul (I mean, it's a David Boreanaz character, after all), but last night's ep showed a certain glee (especially in the interrogation scenes) that seemed out of place. I hope it's an aberration, the writers trying on a different costume in the spirit of a ghoulish holiday. I'd hate to see Bones become the later, tiredly reactionary seasons of NYPD Blue (David Boreanaz as Dennis Franz? Now, that's scary). Far better to embrace the spirit of the last scene-- a delightful image of the normally staid Bones twirling like Wonder Woman in her costume--and its belief in the power of costumes to reveal dreams and desires, rather than sadistic nightmares.
Labels: Bones David Boreanaz detectives TV