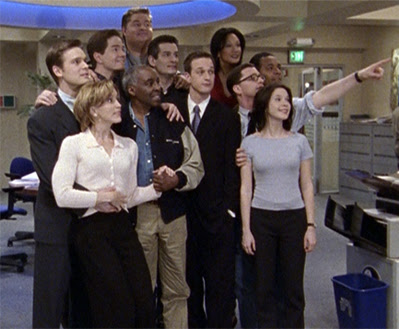 A silly question, perhaps, but-- am I the only one who remembers when ESPN had a sense of humor about itself?

Many years ago, before "Boomer" Chris Berman boomed once too often, before Stuart Scott drifted off into the ether of his own hipness, and before god-awful Jay Mariotti had a daily television forum for his bloviating, ESPN seemed to offer the best of both worlds: top-flight, round-the-clock sports coverage spun just enough to wink at their audience, and let them know we shouldn't take any of this too seriously. It helped that their public face was a Sportscenter anchored by Dan Patrick and Keith Olbermann, the best reporting tag-team the network could offer. Olbermann and Patrick balanced each other beautifully, with Patrick's smooth, slightly oily charm bouncing off of Olbermann's curmudgeonly smart-assness ("He's day-to-day...We're ALL day-to-day!") like James Brown bouncing off Maceo Parker's horn. Even Aaron Sorkin took notice, and crafted his first television show as a fictionalized version of their success. They were smart, fast, and very funny, and nearly every ESPN anchor that's followed has captured only the oily, curmudgeonly, assy parts of the equation in their attempts to replicate the pair's dynamic.

The network also had very funny ads, which branded them as the Saturday Night Live of sports as much as any of their programs:

And now? Now it's the Poochie of television networks, so desperate to remain hep that it's lost all sense of what made it fun in the first place (gee, maybe it really is the SNL of sports news!). Turning on ESPN now, I find that I have to hit the mute button just as the channel's changing over, for fear I might hear Bob Ryan or Lee Corso or Mike Ditka or (God help us) the nearly somnabulant Bill Parcells droning on and repackaging the dopiest conventional wisdoms as cutting edge. In his wonderfully scalding and scary history of the network, journalist Michael Freeman documents the network's rise from scruffy cable joke (a sports network in Connecticut??) to 500-pound gorilla (a rise expedited by Disney's purchase of both ESPN and sister network ABC in 1995), and all the dark problems that arose along the way: rampant drug abuse, widespread sexual harrassment, chronic gambling, raging egos and many a reporter-subject conflict of interest. These days, Patrick is gone, and Olbermann's doing sports coverage for NBC's Sunday night football game (gamely trying to recreate the old tag-team magic with new partner Bob Costas, who's great but just too squeaky-clean earnest to make the verbal jam sessions work).

That there's any network at all, 30 years later, is a minor miracle. And I don't begrude the network their success-- lefty myths of "staying pure" and "not selling out" have always struck me as so much reactionary, authoritarian silliness. But does broadcasting football mean you can't let Jimmy Kimmel crack jokes about Joe Theismann in the booth (Theismann's firing, by the way, is one of the few smart things the network's done lately)? When did the normally self-effacing Tony Kornheiser get so self-serious about his image? Was Mike Tirico nervous that JImmy Kimmel might spill the beans on Tirico's past? Given the network's recent history with football commentators (and commentators in general), is Kimmel really the worst thing they can think of? Isn't this just the network's obnoxiously overt synergy (Kimmel has a talk show on sister network ABC) finally blowing up in its face?

(It's come to this: ESPN has actually convinced me that Jimmy Kimmel-- Jimmy Kimmel!-- was the sane person in the room. Good Lord).

Then again, neither Rush nor the onomatopoetically-named Woody dissed the brand, which these days seems to be the one thing ESPN can't find humor in. Perhaps Kimmel should've heeded the advice of writer Harlan Ellison, who famously described his brief experience of working at Disney thusly: "At Disney, never f**k with the Mouse."
Labels: Aaron Sorkin Disney Media Sports TV

Greg said…
I loved ESPN back in the nineties but those days are gone. Dan Patrick and Keith Olbermann actually kept me from changing the channel even when they were talking about hockey or lacrosse or something. Hell I didn't care they were too entertaining. And BTW, I never ever found Berman entertaining. And the people on Saturday, my college football day - oh god they suck. I've never liked Lee Corso but he was more bearable when Craig James was paired up with him but Mr Underavenue or Sideroad or whatever the hell his name just bugs the living crap out of me. And analysis? Please. It sucks out loud. Watching Lou Holtz one wonders how he ever won a National Championship with Notre Dame or led the Gamecocks to three straight bowl victories. He seems like a bore and a moron.
October 18, 2007 at 8:35 AM

Anonymous said…
Me, too. I used to love watching Olbermann and Patrick. I'm not a sports fanatic, but I have followed the NFL from year to year. Their SportsCenter was just good TV, period, and it gave me something over which I could bond with students who felt like they had little in common with their English teacher. (I sat there nodding as I listened to Sorkin talk--probably to Terry Gross--about how he, no sports fanatic himself, became engrossed in SC and, as C'phile points out, wound up creating SportsNight.) Once Keith O. left, there was no reason to watch. And that's before I found out about the sexual harassment problems--oy veh.

Brian Doan said…
Jonathan-- Well, I don't mind Kirk Herbstreit as much, and I say that as someone with no love for anyone or anything Ohio State. Compared to Corse-O, he seems like a rhodes scholar (although I am going to start calling him Curbside, after all your fake names (:). And I agree with both you and boolise that P&) were the network-- able to make the silliest sports sound fascinating (they were doing it for awhile recently on Patrick's daily radio show, which had an hour or so where Olbermann would call in and they'd talk sports and interview people, but now Patrick's ended the radio gig, too). By the time Sports Night came out on DVD in 2002 or 2003, I realized I'd much rather watch Sorkin's vision of ESPN-- smart, funny, compassionate-- than the actual thing (Olbermann, btw, cynically said "Sports Night" couldn't be about the real ESPN because the network would never let a woman and a black man run the show). I'm surprised, given all the baseball references across sorkin's three shows (and A Few Good Men), that he doesn't think of himself as a sports fan.

If y'all aren't watching NBC's sunday night pre-game show for football (I think it starts at 7 or so-- I always come into the middle), it's worth watching-- it's not quite SC, but it's great to see Olbermann doing sports again, and ably supported by costas, peter king, jerome bettis, tiki barber, and (former gator!) Chris Collinsworth, it manages to be smart and fun without the usual macho overbearingness that mars so much football coverage. You know, the way SportsCenter used to be.
October 18, 2007 at 7:31 PM