A story told in David Niven's memoir of life in Classic Hollywood, Bring On The Empty Horses:

The 1936 Mayfair Ball, a who's who of Hollywood. The invitation is for a "black-and-white ball," and most of the guests have stuck to the dress code, except one: Norma Shearer. A queen of Hollywood, and the wife of its crown prince, Irving Thalberg, Shearer has timed her fashionably late entrance to be an event. As the "Divas" site notes, "At the Mayfair Ball that year, hostess Carole Lombard requested that her female guests wear formal gowns of snowy white. Making a last entrance was Norma Shearer 'wearing a spectacular scarlet gown.' ". The room, of course, is agape, and Shearer's dress, amidst all that white and black, makes her the center of attention. She is beautiful, she is an icon (legend has it John Huston saw this moment and wrote it into Jezebel), she is the lady of the hour.

Suddenly, a loud screwball yell pierces the quiet reverence: "Who the hell does Norma think she is-- the goddamn house madam??" It is the voice of Lombard, and as it did in so many films, it shatters the weight and pretension of the moment: nothing can withstand the dizzy speed and fierce intelligence of Lombard delivering a good line, finding ways to send words and jokes bouncing around the other actors like a pinball in a machine. At the ball, laughter erupts, the moment passes, and the real queen has restored equlibrium. 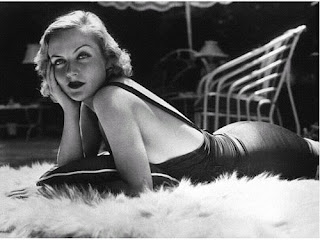 VP81955 said…
Since you like Lombard, I cordially invite you to visit (and join) my community dedicated to her life and times, "Carole & Co."