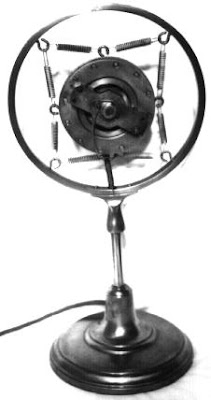 The other day, in a private reading, talking about Lipstick Traces and 24-Hour Party People, a student mentioned how the film set off in him "a nostalgia for a time I never lived through."

I think that's a good description of how I feel about "old-time radio drama." Of all my geeky passions, this is probably the Charlie Browniest. Born in 1973, decades after these sorts of shows went off the air, I first encountered them through old tape recordings of the Lone Ranger, shared by my parents when my brother and I were enjoying re-runs of the TV version in afternoon syndication. Local stores and mail orders brought more: The Shadow, Jack Benny, anthology shows like Suspense and Escape, The Adventures of Sherlock Holmes. I had cases full of these tapes when I was a kid, and I suppose they are still in my parents' house somewhere, although I no longer own a tape player.

When I went to grad school in Gatortown, I was happy to discover that the campus station ran "Theater of the Mind," an old-time radio show, for three hours every Sunday evening. It was a nice program to have on in the background while grading, and occasionally, a particular segment of the program would jump out, such as the brilliant, "experimental" work of the 1950s CBS Radio Workshop, whose tales were often haunting in their use of voice and effects collage to create surreal, Bradbury-like mental landscapes.

When I moved to Cineville, I really missed those shows, so I was pleased to discover the other day that Wisconsin Public Radio has its own old-time radio show every weekend, and that it's been archiving past episodes online for clear and easy listening (Real Player required). If you long to hear Benny's whine, the Shadow's laugh, or William Conrad's booming voice, well, everywhere, mosey on over (link to the right on the blogroll).
Labels: childhood General Geekery memory Radio