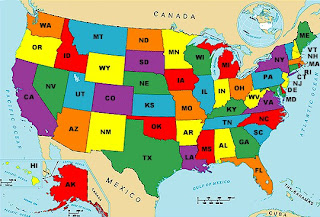 --Sunday night, talking to my parents about the Browns' long-awaited win over the hated Baltimore Ravens (my dad is the biggest Browns fan I know). My mom asks about Florida's game the day before. "Lost on a field goal at the end," I say, almost shrugging verbally (UF tends to lose to Auburn, and march forward to long-term victory, anyway). "Well," she says encouragingly, "at least Indiana won."

--Jeff posted the other day about his trip back to Michigan, mentioning the threat of shutdown (eventually averted, at least for awhile) that hung over the state at the time. Reading his blog entry, I felt a mixture of sympathy, curiousity, and dismay-- in part because of what might happen to the state, in part because I felt guilty for knowing so little about it. Most of my family lives in Michigan, and I spent most of my childhood (from the age of four until I went away to college fourteen years later) there. Michigan is the purplest of states (and not just because of its proximity to Minnesota), a quirky mixture of social progressivism and far-right fringe, economic populism and conservative business forces. Until recently, it was a bellweather state in presidential elections, voting for the winning candidate in every election from 1968-2000. With this diversity of political views, it somehow seems appropriate that its governor is a Canadian, adding one more layer of left/right, outsider/insider to the mix. Michigan is the home state of both Stevie Wonder and Ted Nugent, Eminem and Aretha Franklin, Sam Raimi and Robert Flaherty. We are the Walt Whitman of the Midwest.

I say "we" and feel the twinge of uncertainty as I type. I haven't been an official resident of Michigan for eleven years, taking a peripatetic path to school in Indiana, to work in Chicago, to graduate school in Florida, finally landing here in Cineville, Ohio. So many residences, so so many teams to cheer for, so many shifts in the weather.

--Am I a bad film academic for not wanting to link to David Bordwell's blog? What do we profess in a space like this, what are the obligations, and how do we negotiate that line Brecht famously pondered in Walter Benjamin's "Conversations With Brecht"?

I often imagine being interrogated by a tribunal. “Now, tell us Mr. Brecht, are you really in earnest?” I would have to admit that no, I’m not completely in earnest. I think too much about artistic problems, you know, about what is good for the theatre, to be completely in earnest. But having said “no” to that important question, I would add something still more important: namely, that my attitude is permissible.

Of course, this is all assuming that the WB was telling the truth, reporting the conversations accurately. We trust Walter Benjamin, but he did love his anecdotes after all, the more fabulous (in all senses) the better. I suspect Benjamin would've loved blogging.

--Last Friday, I shared my blog with my students, as a way to tell them about some of the useful comics links on my blog roll. I felt like I was outing myself, revealing my secret identity.

--The Red Sox just walloped the Angels in Game 1 of the ALDS. Josh Beckett was throwing a shutout, although I haven't seen the final score to know if it ended that way. Three years ago, living in Florida, coming out of the hellacious hurricane season of that fall (many a memory of crouching in a closet on a Sunday night as the winds raged outside, no power, huddled around a battery-powered boombox as the campus stations played old-time radio drama punctuated by news updates and weather reports: "A tornado was spotted near Ocala...", squinting at the Marvel Tales or the Chuck Klosterman illuminated only by flashlight, trying not to panic...), I was a big Red Sox fan. It had nothing to do with regional loyalty (my team was the Tigers, then in the midst of a disastrous season, 20 years after their last World Series, a place they wouldn't return to until I returned to the midwest), and everything to do with history. That past summer, I'd caught up with Ken Burns' Baseball, a brilliant film that never rests in giving tongue baths to the BoSox; it can get a little much (and plays far too much into the lefty cliche of idealizing the underdog), but an anecdotalist like myself couldn't help but love their rich history, with all its quirks and reversals and great testimonials. More importantly, the Sox were John Kerry's team, and when it looked like they were on a collision course with the Astros that year, I decided I wanted Massachusetts to beat Texas in everything that year.

Watching the game tonight, I felt--ennh. Better the Sox than the Angels, I guess (one might think, with their own atopic identity mimicking mine, I might cheer for what King Kaufman calls the "Los Anahangeles Angels," but I've always found them off-putting, for some reason). Regional pull should make me cheer for the Indians, but my adoration of the Browns, and admiration for the Cavs, simply can't translate to baseball-- cheering for the Tribe just feels like the act of a traitor. Which leaves me with the Cubs, playing at a stadium I used to live a quick five-minute walk from. Oddly, I never went to a game there.

--Multiple Choice
1. I'm thanked in a back issue of Sight & Sound.
2. I met Flavor Flav at the Water Tower Mall in Chicago.
3. Diana "Star Trek The Next Generation" Muldaur once shook my hand.

At least one of these statements is true.

Greg said…
Well, you said a mouthful. Where to start?

Let's start with the Bordwell thing. I say link to whoever the hell you want (as long as I'm one of them). I think the professional bloggers like Jim feel an obligation to advertise the other pros out there. But quite frankly, Jim Emerson is the only one who I feel really truly has his heart in it. The others feel like they either think it's their duty to blog or worse, they're doing us little folks a favor by enlightening us. I haven't made my way over to Bordwell's so I can't pass any judgment there. I do know him to be an excellent critic though. The point is though that Jim engages his readers and invites community conversation although I do wish he would advertise us little folks a little more. In the past year he's posted on Atkinson, Bordwell and Maltin. I like all three (and even commented on the Maltin post because I like him so much) but they don't need the publicity, the praise or the encouragement.

Also, and here I'm not naming anybody (I'm not an idiot, close but not one yet) some of the pro bloggers are ghastly bores. They just don't have a feel for it. They don't make it fun, you know what I mean?

I could go on further but I've said enough for now. For the record, since I'm talking about promoting, the blogs I visit daily right now are Cinebeats, Sergio Leone, Bad for the Glass, Shoot the Projectionist, The Bleeding Tree, Ringwood, Flickhead, Scanners, Charlie Parker, Ricks DVD Picks, Cinematic Art and of course Bubble Gum Aesthetics. That's my dirty dozen. I hope I didn't leave anyone off. I visit others too but those are the ones I hit every day just to see what's going on. Oh yeah, and Peter Nellhaus (he's got a hell of a housing story to tell). So make it a baker's dozen.

And one last thing: You can never give enough ball-washings to the BoSox baby, we all know that. GO BOSTON! Sorry, had to do it. Quite frankly, if the Cubs make it I'm rooting for them.

Brian Doan said…
Aha! Well, I'm looking for some kind of "let's go to the tape" joke here about the Pats, but nothing's coming to me...(:

I respect Bordwell as an historian, and his blog is interesting, but it's not a space I go to with any regularity. I mostly used him as an example of a big name in my field, to think about the questions of obligation and expectation, in blogging and other forms of writing. I'm with you-- link to who you like! And I like a lot of the sites you mentioned (and I'm curious to check out those I haven't visited). And I'm flattered you want to link to me.

Well, Better the BoSox than a lot of teams one could name. I'm just a little tired of the mythology of the woebegone Red Sox, the greatest underdog team $165 million can buy. I mean, just the law of averages means the cubs have to win sometime, right?
October 3, 2007 at 11:27 PM

Greg said…
We're not underdogs anymore which is why I would happily root for the Cubs. I'm much better with underdogs. I still love my Pats but I think I loved 'em a lot more when they were at the bottom.

Also, about coming out about blogging to your students: My wife is the only person in my entire extended family and network of friends and co-workers who has any idea I'm online. I don't advertise it.

And I almost forgot your multiple choice. I'm going with shaking hands with Diana "LA Law" Muldaur.
October 4, 2007 at 8:13 AM

Greg said…
Sorry to keep commenting but I also wanted to mention I like Sunset Gun, Ed Copeland, & The Self-Styled Siren. Didn't want to offend anyone I regularly read by leaving them off.
October 4, 2007 at 8:18 AM

Brian Doan said…
I love those three blogs-- Gun, Copeland and Siren-- that you added to your list. Looks like your Gamecocks played well tonight. As long as he's not playing UF, I'm happy for Spurrier.