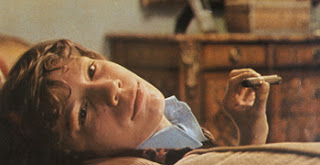 For the first time in years, I didn't see a lot of movies this past summer (and when the blockbusters offered are along the lines of the disappointing Die Hard 4, I don't feel I missed much), but one of my most profound and sensual viewing experiences came in July, when I watched Murmur of the Heart, while making my way through Criterion's recent Louis Malle box. I knew right away, when the jazz came up on the soundtrack and the kids spoke of Charlie Parker, that the film would speak to me, but I didn't expect its voice to be so witty, at once offhand and deeply felt. So much could've gone wrong in this film, whose plot summary suggests a story that wouldn't be unfamiliar to John Landis or Judd Apatow. But while I admire Apatow's work, it looks positively ham-handed and moralistic compared to the fleetness of Malle's, how effortlessly he moves from bourgeoisie satire to ambiguous drama, often within a single scene (note the unresolved tensions in the embrace between mother and son at the sanitarium, how we're not sure if we're supposed to be shocked, moved, amused or aroused), or how he manages to offer screwball anarchy (the brothers are delightful) against a dense visual backdrop of French domesticity, each one enhancing the strength of the other, instead of canceling it out. The key, I think, is how Malle works without judgment, shaving the 'morality' off the story and thereby opening the narrative to a far wider range of emotional and ethical responses; like his contemporary Francois Truffaut (for whom he was often mistaken), he seems to have absorbed Renoir's great remark about Rules of the Game: "Everyone has their reasons," and this empathy made his work comic in the best sense.

While an acclaimed and successful director, you don't hear Louis Malle discussed nearly as much these days as Godard, Truffaut, Resnais, or Varda, at least in academic circles. Perhaps his work appeared too craftsmanlike, too bourgeois, too eclectic to really fit into a prescribed aesthetic or ideological program (thus limiting the portability of his "meanings," limiting his usefulness as a rhetorical weapon or tool). Perhaps it's because he married a Hollywood star, and even appeared on her TV sitcom. This state of affairs might be changing with the recent Criterion releases of films like Elevator to the Gallows, Murmur, Au Revoir, Les Enfants, Lacombe, Lucien and the Eclipse box of his documentaries, and it certainly deserves to. If he lacked the formal daring of Resnais, the zeitgeist canniness of Godard or the deeply felt melancholy of Truffaut, he made up for it with a profound curiosity and empathy for characters, places and small moments that run as threads through all his work.

In the essay that accompanies the Murmur DVD, critic Michael Sragow notes that " his best movies pivoted on signature moments of violent or chaotic release—there was always a volatile temperament simmering under that virtuoso surface," and traces this style to Malle's reliance on improvisation, learned when making documentaries in India the mid-to-late sixties. He quotes Malle: “I think this experience of relying on my instincts was quite decisive in my work...I’ve always tried to rediscover the state of innocence that I found so extraordinary working in India.” Such a quote suggests why he was the perfect director for a talkfest like My Dinner With Andre: that project needed a director who was both unobtrusive and deeply curious, whose instincts could pinpoint just how to frame a philosophical, rambling (and wonderful) conversation about art, politics and meaning in a way that was cinematic without overpowering the speakers, wryly commenting on its characters' flaws and fantasies without fingerpointing. Malle is no less sensual than any of his New Wave contemporaries, but it's a quieter kind of sensuality, one that only reveals itself in glances and quick moments, like the flash of lightning (there and then gone) that Walter Benjamin described as the truest kind of knowledge.

It made Malle a wonderful documentarian of French history. Witness Lacombe, Lucien, a film of purposeful opacity-- it's hard to know precisely what's happening or why, and Malle works hard to establish an almost documentary distance between subject matter and viewer. It's a film whose winding, anecdotal narrative only reveals its true fascistic horror halfway through, and by then, we're so imbricated in its web of relations that gaining an easy, moralistic distance becomes impossible. This kind of methodology found its most acclaimed expression in Au Revoir, Les Enfants, Malle's autobiographical look at life in a French boarding school during the Occupation. Given its school setting and feel for adolescent rivalry, it's perhaps the most "Truffautish" of Malle's works, although the explicit political context (Malle was actually a political science student before switching to filmmaking) distinguishes it from The 400 Blows, makes you constantly aware of the ghosts of history that envelope the schoolboys. Glances are famously key to the narrative's twists and turns, but what I mostly remember are colors: blacks, grays, dark blues and forest greens, a heavy palette that suggested chiaroscuro painting.

Are these the tricks of memory (I haven't seen the movie in 20 years)? Perhaps, but then the fluidity of memory was as key a motif for Malle as it was for Alain Resnais, and his finely tuned sense of how to express politics emotionally means his work has dated better than Godard's Dziga Vertov period agitprop. More than anything, Malle felt like a jazz sideman in a filmmaker's body (think of how well Miles Davis matched with him-- two cool bop sensibilities jamming in the same frame-- on Elevator to the Gallows), trusting his instincts and his environment as generators of creativity. One of my favorite anecdotes involves Malle being mistaken for his friend Truffaut by tourists in New York and Paris. "Mr. Truffaut, we love your work, can we have your autograph?," Malle would claim they'd ask. His response was that of a true improviser, and a slyly generous wit: "Oh, thank you, of course you can," he'd smile-- then sign Truffaut's name.