I was very sad to read of the death of Deborah Kerr today, and was going to write a longer post, but so many good bloggers got to it before me. So, I urge you to go to read wonderful tributes from Edward Copeland, Bob Westal, and everyone's favorite cinephiliac chanteuse, the remarkable Self-Styled Siren, whose remembrances are by turns analytical, historical, anecdotal and effusive. For myself, I will note the small irony that she died a day before Joey Bishop, with whom she shared a Frank Sinatra connection, and also say that I was taken by this part of a fine New York Times tribute: "She could be virginal, ethereal, gossamer and fragile, or earthy, spicy and suggestive, and sometimes she managed to display all her skills at the same time."

It's the "or" in the sentence that seems like a mistake: it strikes me that one of her many contributions to screen acting was to remind us of what a false binary "suggestive" and "ethereal" is. Just watch her in the clip above, from Black Narcissus: yes, it helps that it's a Powell and Pressburger film, brilliantly photographed by Jack Cardiff, but her nervous movement around the room, her glancing walk through the courtyard, and all those magnificent close-ups of her quivering, ambiguous expressions convey a tremendous sensuality, an actress skilled at portraying characters desperate to keep their desires under control, often failing and finding humanity and transcendence in that failure. “The camera always seems to find an innate gentility in me,” she said in an interview, but through that gentility, she was able suggest a far broader range of emotions, and to imbue many a romantic melodrama with tremendous depth: her playing with Cary Grant in An Affair To Remember-- wry and knowing in the early shipboard scenes, uncertain but open to new experiences on the island, and perfectly pitched in the famously teary final sequence-- is a textbook example of skilled craftspeople drying out and making real a very sappy tale.

Like so many of the bloggers you'll read today, however, my favorite performance of hers is in Powell and Pressburger's The Life and Death of Colonel Blimp. She's quite wonderful in the early scenes, a "Mata Hari" leading a British convoy in high pursuit through London, trying to warn General Wynn-Candy of their plans (she's very funny with the physicality of the scene, and I wish she'd made more comedies); as "Edith," she plays beautifully off Roger Livesey in their drawing room meeting in Berlin, striving to maintain her propriety through her nervousness (her body remains stiffbacked, but her eyes dart up and down to judge his intentions), until Livesey's delcaration-- "Cheer up! England isn't as bad as all that, you know!"-- causes her face to light up, as if she's found a kindred soul.

Two moments in the film, especially, stand out. One comes following the famous duel, an hour or so into the film. Candy and his rival-turned-friend, Theo Kretschmar-Schuldorff, are hospitalized, and as they recover, Kerr is a constant visitor. A "bridge four" is organized, consisting of Theo and Frau von Kalteneck. What was, until the new couple arrived, a series of intimate and ironic close-ups (Edith can't take her eyes off Candy as he teaches her bridge, while Candy is oblivious to her feelings, a joke made even more apparent by a bandage that covers the edges of his eyes) becomes a series of long and medium shots, as Edith is pushed and squeezed into the background. She is isolated first with Theo in a separate shot (Frau von Kalteneck is monopolizing Candy), but even when they're brought together, Candy is looking at the other characters in the frame. Westal describes it very nicely in his post:

In this scene, she is gambling over a coin toss with her friend, with whom she is probably falling in love — only to be distracted when someone else falls for her and bothers to tell her so.

This very small moment expresses the easygoing intimacy between the two. In fact, I said “probably falling in love” because I’ve never been fully convinced that her character in this sequence was necessarily in love with Roger Livesey’s Blimp, though he later realizes he’s blown a crucial opportunity. So believable are they as close friends in moments like this, it’s possible that she’d just as soon not ruin things with too much emotion, and thus when an equally good, arguably superior, man expresses an open interest, she makes another selection.

That's a great and thoughtful description, but I disagree: I think she is in love, but again struggles to control her emotions when they might wreck the moment. It's a quintessential Deorah Kerr moment, nicely underplayed and beautifully captured by Powell and Pressburger in a subtle, almost throwaway style. We are offered a sustained passage of frustration and heartbreak covered up by good manners, that suggests how quickly and unnoticeably a life can suddenly change for the worse, how history can be changed by a seemingly inoccuous card game.

The second moment comes two hours or so into the film, as military aide "Johnny" (Kerr's third part in the film) drives Theo home from Candy's house. Framed in close-up, her face half-enclosed in dancing shadow, Johnny tells of how she became a driver, of her boyfriend in the army, answering Theo's questions in a matter-of-fact manner that's completely different from Kerr's more dramatic or comedic tone in the earlier sections of the film. Without calling attention to it, she is the embodiment of wartime calm and "stiff upper lip" straightforwardness. They miss a light, and she turns slightly to address the passenger in the back, as reddish-pink sidelightling drenches her face. She looked beautiful before, framed in the shadowy close-up; now, with her face aglow, she is a luminous vision, the light bringing out the brightness of her lips. Music from earlier in the film kicks in, but Kerr's performance doesn't change: she is still "Johnny" like before, but Theo (and we) see her differently. It is in Kerr's performance that the movie's complex visions of history and memory become literally embodied: we are both here and there, in the present and ceaselessly drawn back to the past (which is also the future, since the movie starts at the end), and what can best reveal this vertiginous relationship? Light projected on Deborah Kerr: the cinema. 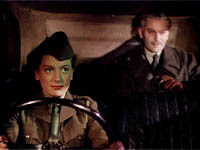 Anonymous said…
Wow, I'm being quoted, and by a prof, no less. Makes me feel all big and important -- even though I now suspect you're reading of the bridge sequence is probably more correct than mine, as I'd likely see if I had time to watch the whole film over right now -- and I really wish I did. (In any case, my use of the word "probably" means that even I think my later speculation is probably wrong. Right?)

And some intriguing thoughts there on the character of Johnny, aka "Mata Hari" vis a vi the rest of the film. When I was reading earlier that morning that some critics had compared "Blimp" to "Citizen Kane," it didn't make much sense to me except in the "Citizen Kane of alcoholic clown movies" sense that any really good movie that's even slightly innovative gets compared to Kane. But, looking at it the way you describe, there may be a more stronger thematic or structural connection than I realized, but then you're the film prof. (You can probably tell I'm writing this late at night.)

But now, thanks to you I now I realize that Ms. Kerr was, however, not Mata Hari in the '67 "Casino Royale" -- Hari doesn't appear in the film though Mata Bond, i.e., Bond and Hari's grown love child, does. Of course, since nothing in that film makes any sense whatsoever, Mata Hari might as well have appeared, despite having being killed by a firing squad during WWI and all.
October 19, 2007 at 3:51 AM

Brian Doan said…
Bob-- I loved your post, and I think your description of the scene is really thoughtful. It's a testament to Kerr and P&P that we can come to different conclusions about it, I think-- they don't choose to bang us over the head with it by emphasizing a close-up, or playing a pop song that expresses the emotions, or whatever.

I'll admit that, despite being a huge bond fan, I've repressed most of the '67 Casino Royale (:, so I'd forgotten she was even in it (great score by Bacharach, though). And with that, I am off to my netflix queue to drop in "Separate Tables," a film I'm embarrased to say I've never seen.
October 19, 2007 at 12:00 PM

Greg said…
Just so it's clear to everyone that's Kathleen Byron as the "crazed" woman in the clip and Kerr is the nun in white. I wasn't sure if it would be clear since Byron dominates the first part of the clip that she isn't Kerr. Anyway, I commented on Blimp over at Cinebeats because I never ever get tired of plugging it. I think of Roger Livesy as some kind of a god. If I could go back in time to the forties I would definitely want to go have a beer with him. Anyway at Cinebeats and Arbogast I mentioned it because no one else seemed to be bringing it up until I read yours. She's great in it as well as in Separate Tables which you will soon be seeing but Blimp is ten times the film that is.
October 19, 2007 at 6:25 PM