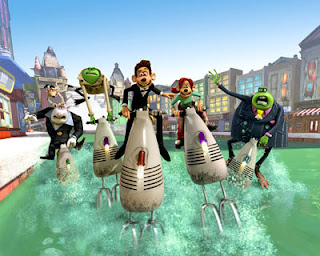 Like its hero, a rat named Roddy, Flushed Away is a soft and self-satisfied cinematic pet that's always on the verge of falling into the crapper. It lacks the handmade charm of earlier Aardman productions like Wallace and Gromit or Creature Comforts -- directors David Bowers and Nick Fell don't have the whimsy or feel for character of Nick Park, nor Park's remarkable expressiveness in their use of animation. The "London" of Flushed Away is less that of Aardman than the world according to Dreamworks: a Shrekified series of nudges and winks about pop culture that's quickly losing its humor and originality (so much of Flushed Away feels very 2002). That worked for the first two Shrek films because the shininess of their fairy tale surfaces were great reflectors for the self-referential one-liners and parodies of Disney form: they were just one more layer of pleasurable plastic. The dank underworld of Flushed, and its pastiche of The Wizard of Oz, is an awkward fit for the script's desire to shove in the product placements and smug jokes, just as those jokey allusions (seriously, the first ten minutes of the movie are unbearable in their tacky overload) rub uncomfortably against the more earnest 'lessons' the film wants to teach. For its first 40 minutes or so, it gets by on its wonderful voice cast (Hugh Jackman, Kate Winslet, Ian McKellan and Jean Reno, among many others) until it can settle into a more modest and pleasant groove halfway through. In many ways, though, the movie's guiding spirit is not the heroic rats, but the villainous Toad, who idolizes the effluvia of pop culture, and lovingly maintains a collection of kitsch as if it's high art. Toad, as you might imagine, is a lot of fun, and so is his French cousin, Le Frog: if the movie had owned up to its tinsel heart and made them the heroes rather than the bad guys, it might have been a better developed delight.
Labels: Cartoons movies