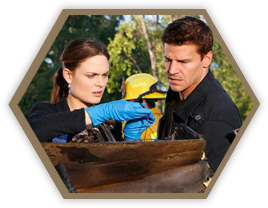 More and more, it is the conclusions of Bones I find enjoyable, the tete-a-tetes between Booth and Bones after wrapping up a case. Last week, it was on the steps of the Lincoln Memorial; this week, it's at their trusty diner, an enjoyable recurring space, with its yellow glow, bright and shiny menus and kitschy decor that often works as quiet symbolism (scientist-cum-junior-G girl Booth is often framed in front of a World War I recruiting poster on the wall) (for all the diner's visual pleasures, though, I'll admit to still missing the quirky Chinese restaurant-- run by rapper Heavy D., no less-- from the first season). However much the reliably stupid Fox teasers play up the CSI angle, the show's real ace-in-the hole is its banter, and how said banter reveals character. To watch David Boreanaz and Emily Deschanel talk about friendship, love, sex, and who won an argument is to luxuriate in the pleasures of craft, to see pros spin formula into fetish.

And it's a good thing those conversations are so alluring, because the more blatant fetishes on display in this week's murder case are the least interesting part of the episode. Don't get me wrong: they are fun, and witty, and handled with a surprising degree of respect for a crime show (imagine if CSI did pony play: it'd be all William Petersen Vulcan leering, disingenuously performed "in the name of science"). The fetish displays also allow for a sly reversal on the usual Bones/Booth formula, which generally has him explaining some aspect of the outside world to her, and demanding greater tolerance; this week, it is the fascinated anthropologist Bones who guides squeamish Catholic Booth through a world of leather, masks, leashes and whips: Bones has its pony play and, um, eats it too. Still, if you asked me who killed whom, or what all the hopping about meant, I really couldn't tell you: that's partially because a busy week has kept me from getting to the write-up until now and my memory is a bit foggy, but it's also because the mystery seems so much less essential to the overall story, and the overall story itself seems so much less focused than in recent weeks. As if written by one of the fetishists in the commune we see, this week's ep is less a coherent narrative than a series of whimsical, overdone repetitions on familiar themes.

Zach's social cluelessness and intense intellectual focus; Hodgins' love of kinky sex and droll one-liners; Angela's ditziness and offbeat imagination; Cam's professionalism and quiet determination; Booth's Luke-Danes-like "Oh, Jeez!" responses in the face of social oddity; Bones' lack of awareness about popular culture: all part of this week's tasting menu, well-known old favorites that are still fun but not arranged with the quite the same skill and care as previously. There is a nice moment at the beginning between Bones and the still-underused Cam, where they deadpan about their mutual competitiveness, but it doesn't go anywhere. And while Zach gets the episode's best line-- "It's possible that my time in Iraq transformed me into a man of action"-- and Eric Millegan delivers it with exqusitely timed naivete, he remains something of a geek cipher; when are we going to get more about his time over there, and when are they going to pick up the thread of character development that his graduation last year seemed to presage?

Still, as Booth says to Bones in the diner at the end, "every once in a while two people meet and there’s that spark," and that's what the final scene-- Booth's passionate monologue about love, nicely voice-overed on top of a montage of ensemble moments--gives this week's show, a spark that the producers would be wise to keep fanning. I don't mean consummating Bones & Booth's Dave & Maddieish flirtations, although that could be really fun (they're so ill-matched that it would be hilarious to watch), but simply remembering that we watch the show, not for its offbeat mysteries or quirky sex games or grisly corpses (I mean, we can get all of that on re-runs of 7th Heaven), but for its insistence on tying all of that to rich characterization, its belief that-- to paraphrase what Booth says of love-- the procedural and the screwball comedy can defy physics, and occupy the same space.
Labels: Bones David Boreanaz detectives TV