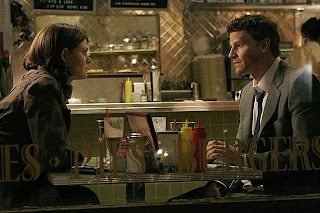 I don't know if Bones is the best show on TV right now, but it just might be the most enjoyable, a shiny and well-oiled machine that, in its third season, has finally found its groove. The first year was a streamlined rookie delight, the second a less coherent but emotionally richer experience. Having gone through the growing pains of that sophomore year-- with its departure of old favorites, introduction of new cast members, ramping up of what someone I know calls the love rhombuses (rhombi?), and overall theme of the tangled ties of family--it seems to have found its ideal balance of humor, heart and mystery. David Boreanaz and Emily Deschanel have their chemistry back-- much of the second season strained their relationship in enjoyable-but-calculated ways in order to establish certain thematic needs--and it's nice to watch them bounce off each other in less grating ways again (the final scene of this week's episode is a lovely moment of sarcastic bonding by the Lincoln Memorial). After watching their relationship devour the second half of the last season, it's good to see TJ. Thyne's Hodgins and Michaela Conlin's Angela return to their proper role of sweet-natured comic relief (and Hodgins looks better without his 'fro). And I continue to be intrigued by Tamara Taylor's Camille, who doesn't take up a lot of screen time, but does a lot with a piercing look, a wry smile or a casually tossed-off line about her unseen personal life-- if the writers are smart, we'll get more of her backstory this year.

I watched the first two seasons in a couple of months on DVD, and while I loved the show, I did feel a little overloaded by the time I got to the last epsiode-- the repetition and variation of procedural-to-character-development and all of the emotional twists of the second half of the year meant I felt a bit like Booth, exhausted and maybe a little queasy looking at all those dead bodies in such a compressed period of time. I suspect it's a program that works well on a week-to-week basis: after a few days away, it was nice to see them all again.

This week's story was about trust and faith, a common theme for Bones, but one which felt lighter and sleeker in this episode than in some of its iterations last year. The central mystery involved investigating the history of a "soccer mom" whose mini-van is blown up in the opening minute of the program. Watching the corpse become a corpse is a new twist for Bones, perhaps borrowed from its Tuesday night neighbor House, and at first it seems odd: Booth and Bones usually come into the body's story in medias res. But it works for this episode, because it's less about identifying the bones this week than the whole body that surrounded them, and the various political and personal issues that complicate the characters' understandings of what they're seeing. And the trust theme played out in the show's various subplots, too: Bones' continuing tentative back-and-forths with her con man father (wonderfully sly Ryan O'Neal, who can turn from charmingly buffoonish dad to quietly efficient psycho killer on a dime); Hodgins' trying to be faithful to Angela in the face of the hot FBI agent that guest stars this week; and Booth's oedipal relationship with his FBI mentor, whose past comes into play halfway through the ep. That's a lot to tackle in one hour, but by now the cast and crew has such faith in one another that they negotiate its twists and turns with ease. It's not as ambitious or searching as a classic program like The West Wing, but that was the show I thought of as the episode came to an end, perhaps because it ends with two friends sitting and chatting a set of DC steps, a recurring image on Sorkin's old show, or perhaps because both shows radiate an assurance that they know exactly what they're doing with their screwball charm, and that their viewers are in good hands. 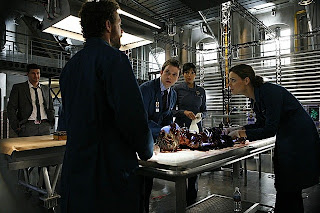 As for House...man. It still has a few minutes to go, but so far it's rough sledding. While it's nice to see The OC's Olivia Wilde and Kal Penn on TV again, the whole "search for the interns" arc is lame, and feels like "House in a Prep School." That might be fun with Hugh Laurie's patented misanthropy, but the series seems so intent on teaching us lessons this week that the show's usual sharp edges-- of character, medical mystery, and emotion-- have become deeply dull. House's humor feels tired by now, his byplay with Cuddy less repartee than repeatee. Even Robert Sean Leonard seems bored. It was nice seeing Chase at the end, but were the "ducklings" really that crucial to the show's creative mix?
Labels: Bones David Boreanaz detectives TV

Anonymous said…
It's good to hear that Bones is good this year--I will have to tune in. I also really enjoyed last week's pilot for the new NBC show Life, which I recommend checking out. And I actually caught the last 15 minutes of Reaper last night, when I got home, and thought that it was pretty good, too.
October 3, 2007 at 9:21 AM

Brian Doan said…
Yeah, you should definitely tune it in. Life looked interesting, and I think Brendan liked Reaper, too. I'm also both intrigued and annoyed by the previews for Pushing Daisies, but will probably give it a try.
October 3, 2007 at 7:28 PM