The gifted journalist and critic Andrew O'Hehir has been posting witty dispatches from the Cannes Film Festival, and his most recent article examines the delirious reception that Indiana Jones and the Kingdom of the Crystal Skull received from the crowds on the Croissette:

Steven Spielberg and George Lucas' long, long, long awaited fourth chapter in their big-budget-imitating-low-budget, self-consciously old-fashioned boys' adventure serial screened here for the first time before an audience on Sunday afternoon, and it was far and away the biggest and craziest media circus I've seen in three years at Cannes. Spielberg, Lucas and Harrison Ford (at a collective age of 190) will see your Brangelina hubbub and double it... 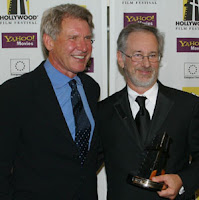 I'm not sure whether that guy ever got his snap of 'Arrison, but Ford worked both sides of the rope line avidly on his way out of the post-screening press conference, signing autographs, shaking hands and consenting, with avuncular grace, to being kissed by comely young women. You can say that his regular-guy shtick is shtick, but it's working for him and he clearly buys it himself. When a reporter asked him how he felt about the literally hundreds of people standing outside on the Croisette with hand-lettered signs, hoping to beg, borrow or steal a ticket to Sunday night's red-carpet screening ("Un billet Indy Jones S.V.P.?"), Ford said: "It's very gratifying. We're a service occupation, as I see it. People have to be interested in the stories we tell, or we're out of luck and out of business."

O'Hehir's a witty writer with a good eye for detail, and I enjoyed the humor and tactility of his descriptions. But I also noticed these passages, which stood out like a hipster's sore thumb:

Jim Jarmusch received an award called the Carrosse d'Or late on Saturday night here, and if it's not one of Cannes' big-name prizes it's a coveted one among film directors. It's given by the French directors' guild during the Directors' Fortnight sidebar festival, and it's a lifetime achievement award given to a non-French filmmaker of world renown. (Previous winners have included David Cronenberg, Clint Eastwood and Ousmane Sembène.) During his potent speech about the power and limits of cinema, Jarmusch reminded us that Sunday would mark 40 years to the day since the student uprising of May 1968 invaded the Festival de Cannes, bringing that year's edition to an early and abrupt conclusion.

So how did Cannes celebrate the anniversary of that near-revolution, which had such a profound effect on French culture and French history? With "Indiana Jones and the Kingdom of the Crystal Skull," bien sûr! Hey, isn't it the Frenchies who have some saying about how the more things change, the more they stay the same?

The joy of the original Indiana Jones series lay in its discovery or rediscovery of the audience's love of cinema as pure adventure, unadorned with social issues or character psychology. In other words, they were meant to take you back to childhood, and perhaps not even your own childhood but your parents' or grandparents' childhood, or America's childhood.

Can that kind of rediscovery keep happening over and over again? And should it? Yes, it's rude to bring this up, but Ford, Lucas and Spielberg are all a lot older than they once were, and so are the rest of us. Furthermore, when Lucas and Spielberg launched this series in 1981, they were pioneers. Adventure movies had been left behind by the self-serious American cinema of the '70s, and they were the guys who were bringing them back. In the years since then, the world's filmgoers have gorged themselves on adventure movies, cheap ones and mind-blowingly expensive ones and every gradation in between. Asking the audience to remember how delighted they were by a swashbuckler made 27 years ago is like asking a diabetic to remember an awesome piece of chocolate cake he ate in high school.

In a sense, "Indiana Jones and the Kingdom of the Crystal Skull" has to get by on its nostalgia appeal -- nostalgia for an earlier style of filmmaking, nostalgia for an aging and beloved character, even nostalgia for an older and more innocent form of nostalgia -- which is an odd path to success for a $125 million motion picture. At the press conference, Spielberg compared these films (for roughly the bajillionth time) to the old Republic Films serials, which were already old-school in his 1950s childhood. The secret of the Jones movies, he said, was to "shoot a compact and economically told story ... and do it with real stunts and real people. We don't say we'll go and make the most amazing chase scene ever. We ask what the story demands and how we can make that funny and exciting."

O'Hehir is no snob-- he also notes that "even in its inflated and creaky fourth incarnation, the Indy series retains a certain unassuming quality, at least compared to Hollywood's recent monstrous productions," a comment that seems to jibe with a lot of the immediate commentary on the film. He also admits that

Part of me thinks that some flea-bitten Parisian radicals should come and close this shit down right now. And part of me thinks: You know what? Cannes needs Indy. We've had five days here of earnest and serious filmmaking, ranging from mediocre to outstanding, but nothing that feels like a movie that will rock the world. (And the locals will get their chance to revisit '68 when French counterculture hero Philippe Garrel shows up with his first-ever competition film.) Couple that with the unseasonably dreary weather on the Riviera, and the pent-up demand for celebutainment and sunshine was becoming unmanageable.

I won't be able to see the new Indy film until at least Thursday, when it opens over here, so my point isn't to defend the film, nor is it to attack O'Hehir, who does a good job of balancing out the positives and negatives in his review.

Instead, what caught my eye and continues to fascinate me is the split between the detailed, intelligent exploration of nostalgia around the Indiana Jones films, and the seeming cognitive dissonance of framing that discussion with a remembrance of May '68, whose mythologies are no less driven by nostalgia. O'Hehir isn't wrong to suggest that a lot has happened in the 27 years since Raiders of the Lost Ark (a point Jonathan also made in stylish fashion on his blog), but hasn't even more happened since May '68? I bow to no one in my New Wave fetish, but what gets the latter off the hook, while the former must remain hanging there? Is it the Francophilia that infects a lot of cinephilia (including mine)? The outdated myths of outsider 'authenticity' in the face of corporate blockbusters? Or does our nostalgia merely need a patina of radicality in order to be read as fresh and daring and not-at-all-navel-gazing? Wasn't one of the theoretical lessons of May '68 (especially for media studies) a reminder that, as Sigfried Kracauer said of photographs, they “stir up the elements of nature...reminiscent of dreams in which the fragments of ”daily life become jumbled,” thus revealing “the provisional status of all given configurations"? There's something ironic about revolution being naturalized, isn't there?

The value of Joyce over Lost is one of aesthetics or taste, not of inherent quality. The instructor’s narrative is a cliched one. “Why don’t these students (regardless of age) understand how wonderful these classic novels or poems are?” I am an English professor. I don’t understand the value either. I read these books once, I don’t read fiction anymore (or much). Fiction, story telling, is not the key to being able to think anymore than washing your car is.

That’s not to say there is no value to literature. There is as much as any kind of expression may have value. I just don’t get the highbrow value of Sinclair Lewis over James Bond, Sylvia Plath over Stan Lee. Even more, I don’t get folks like this teacher who cling to such beliefs as “natural” while working hard to dispel students’ beliefs (what the student thinks is “natural”) in the name of critical thinking.

Change a few of the names and titles, and that could stand in as the ghost that haunts a lot of contemporary film criticsm, which often casts itself as being on the barricades, as the cinematic equivalent of those May '68 students (writing of the battles surrounding Henri Langlois and the Cinematheque Francaise in March '68, Francois Truffaut described them as "the coming attractions for May '68"). 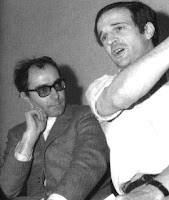 It's become so ingrained that it can occasionally take some odd forms: witness all the critics who complained about Juno's stylized dialogue while simultaneously drinking PT Anderson's hyper-stylized milkshake. There's nothing wrong with the "to the barricades!" position, but it's certainly not the only one, and not necessarily a useful one anymore for the action film (only because condescension is so predictable). 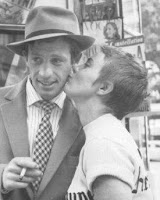 These are notes without a definitive answer to what a new form of critiquing such films might take, but it seems like it could be smart, sensual, self-aware and action-packed itself, especially if we take that beloved New Wave as a model. Or as Truffaut said of cinema (and as we should say of film criticism), "Today, I demand that a film express either the joy of making cinema or the agony of making cinema. I am not interested at all in anything in between; I am not interested in all those films that do not pulse."