Better Him Than Rory Gilmore 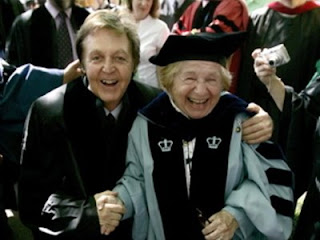 Paul McCartney, the most gifted musician of his generation, was rightly rewarded with an honorary doctorate in music from Yale University this past weekend (in a nice bit of serendipity, he was honored on the same day as one of my favorite poets, John Ashbery). I might have played the jaunty "I've Just Seen A Face" during Paul's walk, rather than the lovely but too-slow-for-a-processional "Hey Jude," but this otherwise strikes me as a well-earned honor.

(h/t to The House Next Door for the news).
Labels: General Geekery Gilmore Girls Paul McCartney The Beatles