A Bond A Week: The Wandering I 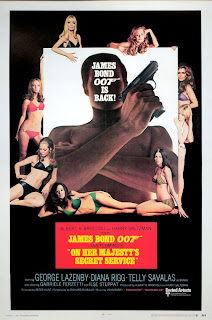 Jonathan politely nudged me in the comments section of the previous post about my distinct lack of follow-through on the promised "33 Weeks of Bond" project. It's true that it's been so long since I posted anything for that project that I can't remember when I last posted anything for that project: like James Bond cruising the mountains in his Aston Martin in Goldfinger, it's very easy for me to become distracted by other topics and passions, and I suppose I need to mumble the mantra he repeats to himself: "Discipline, 007, discipline..."

The truth is, I should never plan blogjects in advance, especially towards the end of the semester, as things will always get busy and there won't be the time to devote to them that they really deserve. Dennis had a nice line the other day about running one's blog, instead of letting the blog run you, and while this is a most addictive little toy, I've felt the need the last couple of weeks to set it aside for awhile and let life balance out a bit more. It's also been an intense time of catching up on other work as the semester comes to a close. While the next week or two should see posts return with greater regularity, I suspect the summer will be one of sudden bursts of posts, then silence, then sudden bursts, and so on.

And working in this distracted way is not inappropriate, perhaps, for thinking about the world's greatest fictional superspy, whose cinematic adventures are all about setting aside narrative thrust, order and coherence (the logic of literacy) in favor of explosions, spectacle, and fetish (the logic of the image). This weekend should see a Bond post again (as well as posts on a bunch of films-- Iron Man (itself very Bondian), The Visitor, Then She Found Me, etc.-- that I've seen recently), but I don't want to get too far ahead of myself and actually promise anything, only to leave you in the lurch. In the meantime, I'd guide you to Larry's cool post, which Jonathan linked to, and which heralds the return of the essential Welcome To L.A. blog, and to this typically fascinating post from Bully, who muses on the importance of cover imagery for the Bond books.
Labels: Blogging Bond-a-Week Bully Comics Hi There James Bond Jonathan Lapper/Greg F. movies Oberlin Shamus/Larry Spies

Bob Westal said…
I've been more than a bit remiss in the blog department when it comes to my own place lately myself, so I grant you Bondian dispensation. BTW, I saw the final Harry Palmer film, "Billion Dollar Brain" this morning because of an upcoming piece on Michael Caine I'm doing. I'd seen the other two in the series, but this one is something else. At first, it starts even slower than the other two (which I like, but they do start slowly) and then, slowly but surely, it realizes it's a Ken Russell film, with everything that implies. I should probably mention it at my place....

And I look forward to your "Iron Man" thoughts. I've got a geeks-night-out penciled in to see "Iron Man" this Saturday, so it'll I can't say that I share your complex relationship and knowledge with the character. When I was reading comics religiously "Iron Man" never struck me as one of the best books. (In fact, I'm not clear that he even had his own book during all of that time. I guess so, but it's not as vivid in my memory as, say, Batman or The Avengers.)

But, it's time to reveal that when I was a young person, before I could read well, "Iron Man" was my favorite on the Marvel Superheroes cartoon show and pretty much my favorite superhero (except, maybe, Super President -- who for years I felt must have been a hallucination). I think I liked the colors and the idea that anyone rich enough and smart enough could be a superhero. Not quite meritocratic superheroism, but it seemed somehow more attainable than becoming, say, the Mighty Thor.
May 15, 2008 at 9:44 PM

Brian Doan said…
Hey Bob!
Yes, that sense of Iron Man's intelligence being his major superpower is one of the more appealing parts of the character, I think. The title has gone through its ups-and-downs, but with its intersections of technology, politics, and capital, I think it's really primed to be in this moment what titles like Batman or Spider-Man were in earlier periods: the comic that captures a mood. It helps that it has a good writing team on it right now. And the movie's pretty terrific.

I've only ever seen the first Palmer film, which I found a bit slow. But I should go back and watch it again, and catch the one you mentioned. Thanks for the heads-up!
May 16, 2008 at 3:41 PM

Bob Westal said…
Well, I'm not so sure I'd tell you to watch the first one, "The Ipcress File," again if you didn't like it. You're certainly not the only person who finds the Palmer films slow -- I'm a sucker for realistic spy stuff, so perhaps more willing than most to go with them. In any case, it's not available right now, so you might as well go with "Funeral in Berlin", which I think I might have liked better -- but even if you don't like that one, you still want to get to the second half of "Billion Dollar Brain" when the realistic series suddenly goes in a very different direction. Sort of "Wild Wild West" Ken Russell style -- I'm not even sure it's actually "good" in the traditional sense, but it sure is something -- great character acting too from Karl Malden, a very over the top Ed Begley, Sr., and a wonderful, hilarious Oscar Homolka -- but the first half is somewhat tough slogging.
May 16, 2008 at 6:05 PM