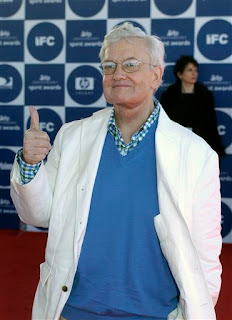 Two recommendations to keep you cool (in all senses of the word) on a scorching hot Memorial Day weekend (at least here in sunny Cineville):

1) Eagle-eyed readers will notice several new additions to the blogroll the last couple of weeks, including a mysterious new shiny object called "Roger Ebert's Journal." Linked to, but different than the RogerEbert.com that has been hosting his reviews, essays and "Ask The Answer Man" questions for several years, this is Ebert's weblog, where he ruminates on films, criticism, American politics, and his personal life (at least as it relates to his work). Ebert is, of course, a gifted writer, and I'm actually enjoying his blog more than his reviews right now-- the latter are excellent, but the blog gives him the freedom to roam and make offbeat connections, a reminder that this Pulitizer Prize-winning critic is also an outstanding journalist and essayist. His most recent post is an appreciation of Chicago legend Studs Turkel (on the occasion of Turkel's 96th birthday), that is funny, observant, and extremely touching in the way it tells us so much about Turkel, Ebert, and the utter necessity of writing for both:

Studs has gotten a limitless number of people into things. I am one of them. He has taught me that if I break my other hip next week, I will simply learn to walk again, and continue do what engages me the most, which is to write about movies. Life might have taken me in many other directions, but this is the one given me, and if I stop following it, I will have lost my way.

True, after all that surgery, I still lack the power of speech. And after all those interviews, Studs is now, in his own words, "Deaf as a post." But I can still write about movies, and thanks to "a nifty little thing-a-ma-jig" device hooked to his hearing aids, Studs can still hear people and write about what they say. You hear about people retiring and then dying a month later, maybe because their life has lost its purpose for them. The lesson Studs teaches me every day is that to live is to live is to live..

2) If your cable system carries the generally excellent OvationTV network, you're in luck-- they're doing a Memorial Day weekend music festival of some of their best, pop-related programming, including marathons of Artists Den (kind of like a New Wavish Austin City Limits) and re-runs of Later with Jools Holland (the ep I'm watching now includes performances from Morrissey, The Beta Band, and Holland's old Squeeze mate, Glenn Tilbrook). 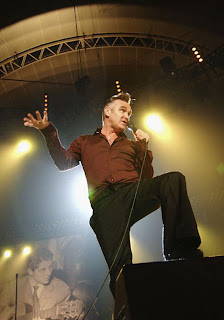 And if a ten-ton truck kills the both of us, I can't think of a groovier set of background tunes.
Labels: Blogging Holidays Jools Holland Links Morrissey Pop Music Roger Ebert The Smiths TV