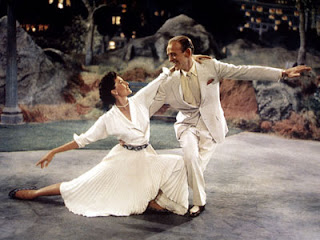 The fine film blogger and Friend to Bubblegum Aesthetics, Jonathan Lapper, has just posted a montage he's made called Frames of Reference; it's a striking piece of work, and I'd suggest checking it out at your earliest convenience. Set to an orchestral jazz piece by Oliver Nelson that echoes Duke Ellington and Henry Mancini, the film structures its clips not by narrative, chronology or genre, but by intuitively matching on facial expression, camera movement or bodily gesture, creating a conductive effect across the clips that short-circuits traditional notions of film history and instead opens our view to a more subconscious, secret history of film style. As Jonathan put it in his run-up post to the film, "What I wanted to do, and did, was take advantage of the language of film, the words and letters, and the fact that so many films, whether consciously or not, use the same shots, the same angles, the same movements when telling their story." Beautifully matched to the swinging, percussive score, this kind of ordering allows for several different kinds of responses: the first, just a cataloging in one's head of all the repetitions and variations of a certain gesture; then, laughter at just how often a certain trope is deployed by filmmakers; then, a sense of fascination with the almost hypnotic, hallucinatory piling up of the similar images, and how this lexicon of gesture and affect transcends cliche to become something magical. It reminded me of Jack Lemmon's comment on Inside the Actors Studio several years ago, decrying the constant complaint of film critics and audiences: "He/she always plays the same role!" (an example, ironically, of how cliched such smug responses can become themselves). Lemmon's response was, "Yes-- but how did they play it?" Like a jazz musician working changes on an old standard, Lapper reminds us that one of the delights of cinema lies precisely in this balance of repetition and variation, of talented actors, directors and technicians discovering new ways to structure the beat.
Labels: Blogging Aesthetics cinephilia film criticism Fun With Video Jonathan Lapper/Greg F. Writing

Greg said…
Thanks for such a terrific write up Brian! You said much of what I want to say in writing about it (and Oliver Nelson) for a post-premiere post. Your reactions described here were the reactions I had in making it and viewing it myself. I'll elaborate more later.