As the school year closes and Infinite Monkey returns from its two-week hiatus, here's a list of stuff I've been buying (if not necessarily reading yet) this week:

Amazing Spider-Man #558 & 559: After the strange sturm und drang of "One More Day" (the wrap-up to the overrated J. Michael Straczynski's Spidey run, where Peter Parker's marriage-- and the memory of it-- were wiped out in a deal with the devil), the current "Brand New Day" run has been a very pleasant surprise, full of more humor, character, and action than this title has seen in a very long time. Hope these new issues continue that trend.

3)Buffy The Vampire Slayer #14: Well, duh. Can Drew Goddard keep up the mixture of humor and horror that got off to such a good start last issue?

4) Clumsy: I really enjoyed Jeffrey Brown's anthology-style memoir Little Things, so I picked this one up on the recommendation of Infinite Monkey's Erin, who said it was the first in what's been dubbed Brown's "girlfriend triology."

5)The Five Fists of Science TPB: Matt Fraction's new Iron Man title is pretty good, so I thought I'd try this offbeat look at 19th century superheroing that he did with artist Steven Sanders. Any book that casts Mark Twain as a
superhero can't be all bad.

Invincible Iron Man #1, Iron Man: Legacy of Doom #1 & 2, Iron Manual, Iron Man: VIva Las Vegas #1: What, you thought there'd be a rush of titles to cash in on the new movie, and I wouldn't get them? I've only had the chance to flip through them all, but first impressions: Fraction's Invincible has slick art and a sure grasp of character; Viva seems like a fun-if-inconsequential one-off from a guest star writer (in this case, Iron Man director Jon Favreau), and also benefits from Adi Granov's robotic art; the Manual is a good one-stop catch-up/encyclopedia for folks who saw the movie but have never read the books; and Legacy of Doom appears to be a fine return from the character's classic writer/artist team of David Michelinie and Bob Layton. That there's a rush of titles at all warms my little shellheaded heart.

New Universal: Shockfront #1: I was underwhelmed by the "New Universe" when it debuted (I was 13) back in 1986, but twenty years on, it intrigues me, and so does the presence of ace writer Warren Ellis. 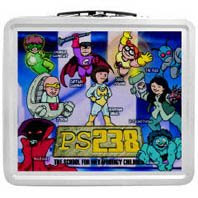 The Question: Poisoned Ground TPB: Following runs on Daredevil and Iron Man, writer-editor Denny O'Neil left Marvel and returned to DC, where he became the editor of the Batman family of titles (including Frank Miller's epic Dark Knight Returns) and did an acclaimed run as writer on The Question, transforming Steve Ditko's Objectivist superhero into someone much more mystical and ambiguous. This is the second TPB to collect O'Neil's stories, and if you have any interest in what mainstream comics were like in the mid-80s, it's well worth picking up: O'Neil is a master of the form, and his inimitable mixture of heroics, social commentary and off-kilter humor is addictive.

10)Secret Invasion #2: OK, this one I did read, which isn't hard, given its shortness and the fact that it's basically one long fight scene. But what a fight scene! Writer Brian Michael Bendis, penciller Leinil Francis Yu and Inker Mark Morales expertly weave action and character together, and while this issue doesn't advance the mystery narrative that much, its initial two-page spread acts as such a striking visual embodiment of so many arguments in the comics blogosphere about Old School v. New School that it justifies the whole issue. 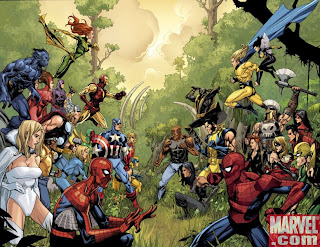 Crap, I'm being sucked into yet another, inevitably disappointing Marvel summer 'event,' aren't I? Damn you, Bendis!

Secret Invasion: Captain Britain #1: Some reviews on the CBR site sounded intriguing, and I can't pass up a good combo of superheroes and superspies.

Secret Invasion The Mighty Avengers #13: What can I say? The Skrully takeoff on the old Avengers #16 cover grabbed me.

Spider-Man's Tangled Web TPB: The promise of writing and art from Darwyn Cooke, as well as a back-cover description ("What's It like to live in a world where Spider-Man swings overhead?") that makes it sound like Marvels led me to pick this one up the other day. We'll see if it lives up to the hopes it inspires, but Cooke's Spidey and Invisible Woman imagery on the back cover is already a delight.

Tiny Titans #3 & 4: Because sometimes, you just want a self-aware kids comic about superheroes whose adventures you sorta kept up with many years ago. Especially after all that Grant Morrison.

Thor #8: As my comments above suggest, I find J. Michael Straczynski's writing to be about as exciting as a Garth Brooks/Kristin Chenoweth yodel-off, but folks I trust assure me his current run on Thor is good, so I'll give it a try.

The Vinyl Underground #5 & 8: I heard good things, and the art was striking. These were the two issues the store had in stock, but if I like it, I'm sure I can track down the others.

17)Wonder Woman #20: If DC publishes a more enjoyable superhero book right now, I'd love to see it. I've never followed WW's adventures in comics (only on TV), but I started reading with Gail Simone's arc, and it's been a delight-- if you've never read the title, it's easy to pick up what's going on, but I also get the impression that there are cool in-jokes for longtime fans. The art by Aaron Lopresti and Matt Ryan is wonderfully clean, and adds to the witty, straight-ahead adventure qualities of Simone's writing. A must for anyone who likes good comic adventure.
Labels: Batman Buffy Comics Denny O'Neil Iron Man Marvel Oberlin PS 238 Spider-Man The Question Wonder Woman

john said…
For some reason, the new New Universal is labeled Shockfront #1, but Ellis already did a six issue run a few months back.

I don't know if you already have them or have read them, but it might be hard to jump in with this new run.

Also, Vinyl Underground is worth it.

Brian Doan said…
Hi John,
Are those the stories collected in the newuniversal tpb? I picked that up awhile back, and it's on the pile for summer reading. Thanks for the heads-up about VU-- I actually became interested in it because you wrote about it on your blog.
May 19, 2008 at 12:31 AM

Francoise Rabelais said…
A Garth Brooks/Kristen Chenowith yodel-off sounds like the worst idea for a comic, ever.
May 20, 2008 at 10:09 AM

Roger Whitson said…
CBR had a review of the Iron Manual and said that the most interesting thing in the book was that it highlighted how many people Tony Stark had killed (either intentionally or not) during his career.
May 20, 2008 at 9:53 PM

Brian Doan said…
Francoise--Brooks/Chenowith '08: I can put you down for two tickets, then? (:

Roger-- that's really funny (I assume it was meant to be so). It also suggests why he's an interesting character-- precisely because his heroism and heelishness spring from the same compulsive desire to control and do good. I think some of the best stories in the comics come when those two sides come into conflict (although he's still, like, way behind Wolverine in the killing department, isn't he?).
May 20, 2008 at 10:20 PM