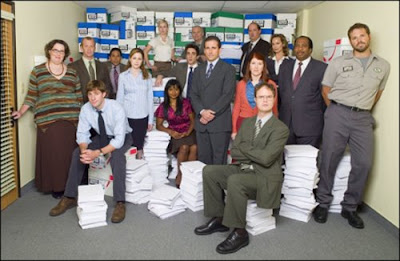 Several years ago, a friend and I, while talking about television shows, agreed that a really good continuing drama has about five or six good years in it, before decline sets in or the show is cancelled (this rule applies mostly to the sorts of post-Hill Street Blues, serialized narratives with ongoing, multiseason arcs; shows driven by standalone episodes, like the CSI and Law & Order franchises, don't really have to worry about this problem). For instance, NYPD Blue worked for six years before it collapsed under the weight of too many teen-idol replacements for Jimmy Smits and David Caruso; The West Wing's fifth season was a travesty without Aaron Sorkin and Thomas Schlamme around to guide things; and even a sitcom like Friends, whose character arcs resemble those of dramatic programs, had a hard time keeping things interesting after year five. Most notably, there's the work of Joss Whedon, whose magnum opus, Buffy The Vampire Slayer, foolishly gambled on a seventh season after the dark masterpiece of its sixth, and paid the price with the worst material of Whedon's career (and don't even get me started on what happened to Gilmore Girls after its fifth year). There's no set formula, of course, but it's fair to say that a program's cast and crew might get a little bored after awhile, might have trouble finding new shadings for their characters or new spins on their environments, and might begin to take it easy and coast.

All of this means the fourth season seems to be the tricky one, often serving as a transitional year (seeing the characters move to a new town, go off to college, bid older cast members farewell), and at its best, setting up newer and potentially richer arcs for its remaining characters (Buffy and Gilmore GIrls both did this, and so did The West Wing, although Sorkin didn't stick around to see it through the following year). Because of these changes, the fourth season is often the least-liked by casual fans, who complain that it lacks the simple elegance of past years (even if that new knottiness is intentional, and leads to payoffs down the road). 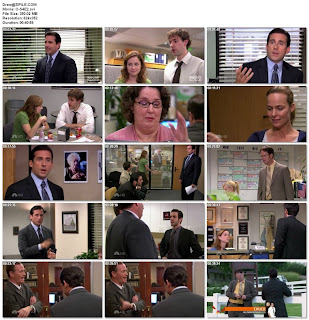 All of which brings us to the fourth season finale of The Office, which aired on Thursday and raised many of these fourth season questions. A recent article in my local paper, The Cleveland Plain Dealer, declared that the major TV networks were "taking a mulligan" on this past season because of the upheavals caused by the writers' strike. I think there's fair evidence for that on a lot of shows, which have scrambled to retain viewership, remind people of pre-strike arcs and resolve plot threads in a much shorter space (on average, about 15 or 16 episodes for a drama, as opposed to the normal 22) (my favorite example of this is Bones-- I love the show, but it's really seemed scrambled by its time off, and seems to be counting the days until the fall, when it can restart the serial killer arc it was mapping out last November).

I supported the writers' strike, and so did the cast and crew of The Office (as these witty videos prove), but the program was thrown off a bit by the strike, too. A brilliant first half of the season continued to mine the rich entanglement of relationships and power plays set up in seasons two and three (including the Pam-Jim relationship, the Dwight-Angela lust, the oily manipulations of Ryan and the ongoing trainwreck of Jan and Michael) while taking those threads to intriguing new places (Ryan's drug addiction, Jan's emotional collapse, using Dunder-Mifflin's inevitable obsolescence as an ongoing metacommentary about network TV in the digital age). When the show returned for six post-strike episodes, they were often less consistent and felt a bit rushed. This second half started strong, with the go-for-broke, painful hilarity of the "Dinner Party" episode, which perfectly captured the program's mixture of character-driven humor, physical comedy, and surprisingly affecting drama; after that, though, it seemed to go into an every other episode mode. None of the eps was bad, and every one had at least one funny or touching moment (especially the pitch-perfect "Night Out"), but it was clear that the show needed those extra seven episodes it had lost in order to really develop its complicated arcs, and that their absence was forcing a great deal of abridgment and cramming (most notably, I would have loved to see the Ryan-Jim rivalry fully play out).

In this compressed space, where character development felt more like shorthand, the cast really ended up carrying a lot of the load, and special mention should be made of those supporting actors who are sometimes overshadowed by the Pam-Jim-Michael triumverate: B.J. Novak, who makes Ryan both deeply dislikeable and strangely sympathetic ("Night Out" is particularly good at reminding us of how Ryan's ego and ambition are intertwined with his immaturity and vulnerability, like a little kid in grown-up clothes); Leslie David Baker, whose curmudgeonly Stanley dodges stereotypes and quietly offers a rich portrait of race, professionalism and frustration in the workplace; Angela Kinsey's terrifyingly officious Angela, whose busybodyness never quite conceals the sense of pain underneath; and most of all, the remarkable Melora Hardin, who takes the seemingly thankless role of Jan and makes her the show's most fascinating character, one whose combination of fragility and entitlement makes her impossible to have a settled response to.

After this up-and-down second half, the season finale, "Goodbye Toby," was a rich delight-- like the other post-strike episodes, it suffered from plot overload, but its one-hour running time somewhat allieviated this condition, and the show's mixture of humor and drama was the most assured it had been since November. I wouldn't dare spoil the plot twists for those of you planning to catch up on Hulu, or waiting for the DVDs, but the program clearly has a plan for at least the next two years, and it wound down its fractured fourth year with grace and style while also introducing a couple of twists which promise to be both hilarious and painful next season. In introducing those new twists, the writers took the pressure off of the ongoing Pam & Jim arc, letting it play out without some grand, season-ending gesture that might have upset its wonderfully relaxed, everyday rhythm (Jon Krasinski and Jenna Fischer continue to be television's best-adjusted couple, and it's shocking to think how rare that is these days).

I framed this piece as an argument about TV drama, but of course, The Office is a comedy. That I can write of it as if it's a drama, with all the melodrama and character development that entails, suggests its achievement in these last four years, and how it's set itself up as the true heir to some of the drama-comedies I mentioned at the top of the post. 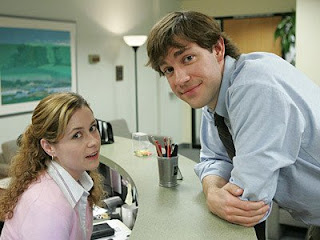 I suspect that's because, for all the show's dark absurdity, it is also the most optimistic show on television, unwilling to settle for either cheesy sentimentality or hip nihilism. Instead, its jumble of comedy, drama, romance and pain offers viewers a space at once cartoonish and deeply realistic (one might say it uses its cartoonishness to get to the realism), and deeply inviting.
Labels: Aaron Sorkin Buffy Gilmore Girls Media NYPD Blue The Office Theory TV Writing

digital_sextant said…
Your paragraph about the cast members is magnificent.
May 19, 2008 at 11:07 AM