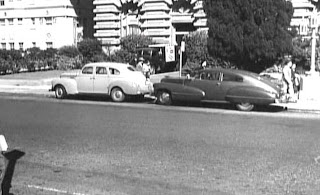 Impact has all the expected tropes of film noir-- the intersection of corporations and corruption, the bizarre love triangles and femmes fatale, the visual and thematic splits between the big city and the small town, and the violent murders and narrative reversals that send our hero down unexpected paths-- but it floats through them like a fever dream, especially in its first half-hour. The result is a fascinatingly disassociative movie, a be-bop riff on on genre conventions that's less interested in the notes of its song than on the harmonics of mood, color, and camerawork that shape it all, and through which it spins out its alluring improvisations.

The cast contributes to the film's hypnotic effect.

As cuckolded industrialist Walter Williams, Brian Donleavy brings a wide face and square jaw to the party, as well as hooded, darting eyes and a harsh voice that feel like they belong to a noir villain as much as a hero (a sense enhanced by the sinister little mustache he grows in the second half of the film). He's well-matched by Helen Walker as his scheming wife-- her tight silk gowns, glittering jewelry and constantly bent elbows squeeze her body into a question mark, an almost campy literalization of noir indeterminancy. The darkness of both actors twists our expectations, allowing for an opening-up of their character's possibilities (Donleavy, in particular, finds a wounded puppy dog look for his eyes, and a stuttering grace in his body's movement in the second half, that transforms him from arrogant businessman to uncertain dupe, and makes him far more sympathetic). As the other members of the film's love quadrangle, Ella Raines and Tony Barrett are physical and emotional right angles to the stars. Barrett is thin, supine and supremely self-absorbed, his voice a constant ooze of come-ons looking for a mark; Raines is youthful, boisterous and warm, like a heroine out of late '40s romantic comedy. When Donleavy's character meets her at a small-town mechanic's garage, the sudden shift from crime procedural to pastoral romance feels less like a jarring turn than the latest in the film's many layers of spatial and characterological exploration.

That the movie could link noir to such Andy Hardy-like gentleness is due to that interest in harmonic improvisation I mentioned earlier, especially its embodiment in slow pans and tracking shots. Moving through ritzy boudoirs, antiseptic high-rise offices, chiaroscuro mountain passes and dusty country backroads, the camera feels almost clinical: its roving eye involves us precisely because it keeps its distance and sets the narrative's melodrama against a documentary backdrop (I've rarely seen a B-movie whose second-unit footage of busy streets, and pillow shot pans away from the action, were as involving as the primary footage).

One of the associations Donleavy carries is Preston Sturges, and there are moments when Impact feels like the logical narrative extension of Sullivan's Travels, its tale of a wealthy man who suffers a life-upending blow to the head acting as a reminder of the darkness underlying the screwball form. Impact isn't as daring as Sullivan's Travels-- it shares the latter's fascination in juggling genres and tones, but lacks Sturges' high-wire risk-taking, his ability to create empathy without cloying sentimentality. Impact's bizarre, literal bookending with dictionary quotes acts as a visual reminder of its need to ultimately conform to 40s conventions, but within those bookends, its improvisations act as a reminder of the invention that such limitations can sometimes spur.
Labels: film criticism Jazz movies noir