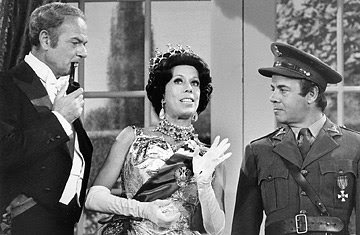 The Carol Burnett Show was one of those great television programs that I was almost too young to understand when it first aired: when I caught it in syndication, as a slightly older child, I marveled at the dexterity of Burnett's physical comedy, loved Tim Conway's genial goofiness, and never quite knew what to make of the man whose imperious snottiness made him seem so much meaner than everyone else.

Now, of course, I realize that Harvey Korman, that imperious joker, was one of the program's linchpins, and one of the best comedic straight men of his era. Korman, who died Thursday at the age of 81, took the fussiness and deadpan on-stage "selfishness" of an earlier generation of comics and comedic actors like Jack Benny or Edward Everett Horton-- their constant need to be right, to control an uncontrollable situation-- and merged it with a more ironic, self-aware sensibility of that persona's limitations; it's no accident that some of the most beloved moments on the Burnett Show came when the three leads broke the fourth wall, let the audience in on the mechanics of their humor, and struggled to keep from laughing at one another's jokes. This style of humor makes it easier to see Korman as the missing link between that 30s and 40s era of comedy and a later sketch comic like Phil Hartman.

Korman had some success in film, most notably for Mel Brooks, who, in the Times obit, praised Korman's talents: "I gave him tongue twisters because I knew he was the only one who could wrap his mouth around them,'' Brooks said. ''Harvey was such a good solid actor that he could have done Shakespearean drama just as well and easily as he did comedy...He could lift the material. He always made it real, always made it work, always believed in characters he was doing.'' Indeed, like many masters of onstage snottiness, he was apparently a thoughtful and generous man in real life, and loyal to his old television companions. Whatever his success in movies, though, it was on TV that he really thrived: one of his early television appearances was, in fact, on The Jack Benny Program, which lead to a supporting role on The Danny Kaye Show; after the cancellation of The Carol Burnett Show, he appeared on everything from Mama's Family to Ellen to the Garfield cartoon program. One of his most recent roles was a dramatic turn on ER, a reminder of Brooks' praise for his range as a performer.

To me, though, he will always be the man becoming outraged in Blazing Saddles when people called him "Heddy," or closing his eyes on the Burnett Show, sighing, then unleashing a nasally complaint upon Tim Conway in the face of yet another Conway character's screw-ups. He made imperiousness into an art form: arch, deeply felt, and yes, funny.
Labels: Harvey Korman movies Obits TV