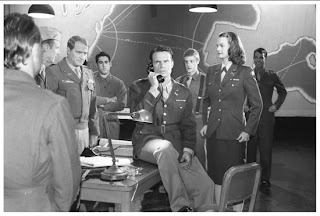 The mockumentary comedy Military Intelligence and You! is at its best when it lets its striking imagery do the talking. Designed to look like a World War II-era training film (but meant as a commentary on current foreign policy), the movie constantly displays a tension between style and narrative that recalls the famous line from This Is Spinal Tap: "It's such a fine line between stupid and clever."

Director Dale Kutzera, cinematographer Mark Parry and editor Joseph Butler have expertly woven new black-and-white material (shot in a combination of high-key lighting and shadow reminiscent of Dr. Strangelove) with scenes from 1940s and early 50s war films and Army training movies, so seemlessly blending the two that only the occasional presence of stars like Alan Ladd, William Holden, Ronald Reagan and Elisha Cook allowed me to distinguish one from the other. It's a dizzying achievement, especially for a film shot on a smaller budget (according to IMDb, Military Intelligence was made for $400,000); it makes good use of limited sets and a small cast to suggest something much bigger in scale, while still having some tongue-in-cheek fun with its indie sparseness (the exaggerated maps, rickety props and absurdly elaborate tracking shots or wide angles that all call attention to themselves).

The actors are quite game, too-- in addition to those nicely deployed "cameos" from 40s stars, the film's actual cast deftly underplays the often obvious, Naked Gun-style jokes in the script. As the square-jawed Major Nick Reed (the good-boy-gone-hard head of intelligence), Patrick Muldoon is all steely-eyed, overly tough grit, his every squint or mutter designed to evoke a combination of Robert Mitchum and James Dean. Mackenzie Astin is underused as Major Mitch Dunning, Reed's unctuous rival, but he deploys his toothy grin, puppy eyes and dashing Errol Flynn mustache to good effect. John Rixey Moore has the Leslie Nielson role as the general in charge of the operation, and should be commended for never once winking to the camera: he's so completely straight that he almost seems like he walked out of a real war film, and is all the funnier for that. Most impressive is Elizabeth Ann Bennett, who takes the thankless (and thanklessly named) role of love interest Lt. Monica Tasty to an almost surreal place. Designed to be Nick's conscience during wartime, she expertly keeps her chin up, her eyes dewy, and her upper lip patriotically stiff; but all of this is conveyed in a breathless manner, whose sincerity so often crosses over into scarily intense earnestness that the film really threatens to become the kind of melodrama it's parodying: Bennett's line readings roll up and down in volume and timbre, and her intonations land on odd spots, like waves of real emotion crashing against the script's forced snark. It's sometimes a bit much, but, like the film's visuals, it mixes registers and thematic meanings more deftly than the writing does.

It's on the level of narration that Military Intelligence and You! fails, which is unfortunate, given that it's designed to carry the weight of the film's message. That might be its problem-- there are some wonderful one-liners ("Sending a man off on a dangerous mission from which he might never return is the second hardest job in wartime...Of course, the hardest job in wartime is to be the man going off on the dangerous mission from which you might never return"), Clive Van Owen does a good pastiche of a 1940s newsreel narrator, and there are moments when the combination of voiceover and stock footage finds precisely the right level of humor and horror, transforming the movie into a kind of Futurist poem. 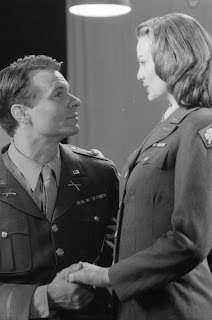 But too often, the script settles for a too-knowing, post-hoc smugness, shooting off har-har jokes about Iraq war planning and "Look how silly those folks were in the 40s!" that felt tired and dated, even if I agreed with some of their politics. In its insistence on trying to control meaning through dialogue and voiceover, Military Intelligence and You! seems to miss the metacommentary that its own image manipulations convey: in an age of photography, an image's meaning is far more elusive, ambiguous, and unsettling than any stern, self-righteous caption can convey.
Labels: film criticism movies parody Politics