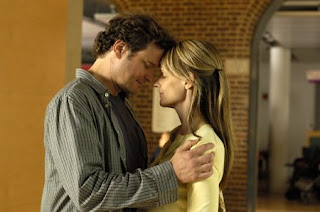 For more than a decade, since he appeared as Darcy in the 1995 A&E Pride & Prejudice, Colin Firth has been tagged as the thinking person's sex symbol: smart, self-deprecating, smoldering-but-reticent. He's appeared in a variety of films in the thirteen years since (most winningly in The English Patient, the chilling HBO film Conspiracy, and the underrated, British adaptation of Nick Hornby's Fever Pitch), but his best-known performances have been spins on that Darcy persona: first as Mark Darcy in two Bridget Jones films, then as the stammering father in What A Girl Wants, and finally as the cuckolded writer in Love, Actually. Those are the good romcoms and dramas-- he's also been wasted in tripe like Hope Springs and Girl With A Pearl Earring. It seemed, at least in big mainstream features, that he was doomed to play the diffident lover-- smart and funny, but buried beneath the sorts of put-upon nebbishy personality ticks that his soft-rock haircuts and puppy dog eyes seemed to suggest.

The most refreshing thing about the comedy-drama Then She Found Me is how it plays with and against this persona. The movie, adapted from Elinor Lipman's 1990 novel, tells the tale of two broken-hearted divorcees who begin a tentative relationship (or as Salon de Frankie nicely put it, "It's a grown-up view of what can happen when you find exactly what you want and need before you're quite ready to handle it"). Co-adapted and directed by its star, Helen Hunt, this is a romantic dramedy with intelligence and bite: it's sweet and funny (sometimes laugh-out-loud hilarious), but also prickly. It wants to cut a bit deeper than Firth and Hunt's recent screen work, and acknowledge the pain of love alongside its more uplifting qualities.

In that sense, it's very well-cast. Firth, as I mentioned above, radiates intelligence, but the revelation here is his anger. The screenplay really allows him to vent the fussy emotions that other films ask him to button up, and the result is a shockingly forceful presence: he's still a winning, sensitive guy, but that sensitive guy has a great three-dimensionality and heft (the puppy dog eyes flare up a lot). Hunt--whose best qualities on Mad About You and in films like As Good As It Gets were her searching eyes and scrunched up, "what the hell are you going on about?" face--matches Firth scene for scene in her willingness to be confused, selfish, and pissed as hell.

None of those descriptors are meant as negatives-- her character and performance are quite winning, precisely because as an actress and a filmmaker, she works hard not to settle for easy binaries or convenient shortcuts. The film makes good use of tracking shots and long takes, allowing the actors space to move and breathe, but also forcing the camera (and hence the audience) to linger on the less savory moments, the difficult fights or cringeworthy bad choices that the characters make: the aesthetic becomes one of both containment and release.

That release is best embodied by Bette Midler, as the biological mother Hunt didn't know she had (and isn't sure she wants). Vivacious, funny, utterly inappropriate and very touching, Midler energizes every scene she's in, without overshadowing the ensemble effect for which the film is striving (she's the film's balance to Matthew Broderick's pitch-perfect, emotionally withdrawn ex-husband). In that mixture of hope, fear, longing and enegry, Midler symbolizes the film's message: love is difficult, messy, joyous, uncertain-- and absolutely necessary.
Labels: film criticism Jane Austen movies Romantic Comedy TV