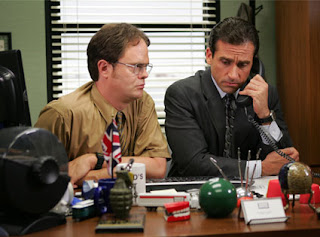 Certain shows sneak up on you. When NBC announced that they were going to translate The Office from British to American TV, I cringed: television's worst-run major network had already botched Coupling, and not even the participation of King of the Hill producer Greg Daniels and Daily Show stalwart Steve Carrell gave me much hope. So much of the sucess of the British Office hinged on the performance of co-creator/star Ricky Gervais, whose puppy-dog eyes and ongoing, interior-monologue-through-body-lanuage (those exquisite sways, half-arm gestures, glances to the camera) made doofish boss David Brent far more loveable than he had any right to be. I also feared the loss of the quotidian, those sadly matte interstices of people copying, typing or chatting on the phone that gave the britcom a lot of its pathos. Would an American show make the time for any of that?

I started catching the re-runs of the American Office on TBS, a happy side effect of chronic insomnia, but it wasn't until the last three weeks that I finally sat down and devoured the show on DVD. I'm five eps away from finishing the third season, and I can happily report that it's a brilliant translation: it catches the spirit of the original, but also takes it somewhere else, so it's less of a pop song cover, say, than a jazz improvisation that builds and enriches the harmonics of the original. Greg Daniels has said in interviews that they wanted to make it their own thing after a first season that saw them sometimes performing the original show's scripts almost verbatim. Their solution, he noted, was to make it more "character-based," and I think this is an essentially fair description. The American version loses some of the almost Brechtian bleakness of the original (going back to re-watch the first season of the BBC version, I was really struck by how dark it is), its vision of business as absurdly cutthroat and hopeless (even Tim, our British everyman, is as cruel and self-absorbed as those around him, in his own way). The American Office is no less discomfiting-- it's perfected the art of the "holy shit," cover-your-face-in-horror laugh-- but maintains a degree of hope and optimism that makes it, for me at least, a more engaging experience. It's also allowed the show to quietly become the quirkiest romcom on TV.

By now, you can Google "Pam and Jim" and discover any number of fan sites devoted to the show's most popular couple. John Krasinksi and Jenna Fischer are very good at quietly, passive-aggressively working out the couple's will they/won't they vibe without making it seem batheic or cliched, but the brilliance of the show is that "PB &J" (as office creep Kevin calls them) are but one of many couples the show works into a delirious roundelay of inappropriate amour. Their mirror is Dwight and Angela, the uptight, officious busybodies who lust after each other in deeply bureaucratic fashion; the "Dwangela" relationship finds its doppleganger in Ryan and Kelly, who youthful beauty is undercut by their mutally manipulative personalities; and by Michael Scott (the show's translation of David Brent) and his boss Jan, who find their sex life less sexy when their relationship goes public (there's also the matter of Pam's boyfriend Roy, and Jim's girlfriend Karen). As you might imagine, the romcom elements sometimes threaten to overwhelm the workplace, both within the show and in terms of the program's generic elements, but the brilliance of the writers and producers is how they weave these elements together through the figure of paterfamilias Michael: he is wildly inappropriate, often offensive, and deeply incompetent at management, but he really does mean well. They derive a lot of humor from that disjunction, but also a great deal of the show's heart. Michael really cares about the people he works with, even if he doesn't know how to express it, and that sense of love-- for work, for your significant other, and for your ad-hoc family-- ties the program together, and intensifies the bond for the viewer.

I feel a particular, uncomfortable shiver of recognition watching Michael, because in the end, he's the Bad Teacher, the nightmare of anyone who works in a pedagogical space. The hokey speeches, the forced humor, the failed bonding, the pointless exercises, the insecurities, the lack of self-awareness: this is what happens when a lesson plan goes awry, and that sense of desperation about a course sets in. The writers brilliantly capture, in Michael's to-the-camera addresses, the rhythms of a lecture gone bad: it's not entirely stupid, but is just enough steps from smart to be painfully hilarious (at one point, Michael asks Jim to rate some "Wisdoms" he's generated on a scale of one to ten, and all of Michael's aphorisms rate a "five"). This teaching analogy is made explicit in the Joss Whedon-directed "Business School," where Michael cluelessly addresses an employee's business class and ends up throwing candy bars to the audience as props, but the whole show plays with the running theme of self-awareness and life lessons.

Which brings us to Dwight Schrute, the show's loveable id. It's in Dwight that the program best distinguishes itself from its British parent. Dwight's BBC equivalent was Gareth, a monstrous moron who could never be redeemed. Dwight, on the other hand, is kind of sweet. Yes, he has an uncomfortable addiction to authority. Sure, he's a kiss-up. Yes, he lacks many basic social skills. And who knows what to do with his strange hobbies and off-kilter remarks. And yet, for the most part, Dwight is not malicious. His bad behavior stems not so much from cruelty as from trying too hard, wanting to be good but lacking the panache to pull it off (it makes his Battlestar Galactica fandom an interesting insight into his character). As the third season progresses, Dwight proves himself to be more honorable than some of the more immediately sympathetic characters on the show, in both his personal and private relationships. 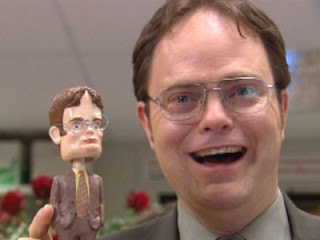 He's that kid in class who's bright and eager and steps on everyone's comments too much, but that you end up liking, anyway (Jim is the class clown). That even Dwight Schrute is allowed the space to learn about himself suggests the humor and generosity of the lessons The Office can teach us about situation comedy.
Labels: Joss Whedon Pedagogy Romantic Comedy The Office TV Writing

Anonymous said…
Great post--your comments on Michael as the bad teacher are so appropriate!
May 13, 2008 at 8:50 AM

Greg said…
I seem to recall something about James Bond going on here. Now while I enjoyed the Connery trailers I was hoping for some more soon. Then I go check out Larry (glad he's back) and find this
anniversary post for Dr No and I think, "wait a minute, Larry isn't even doing a Bond thing."

Okay, I'm just giving you a hard time but I am anticipating more Bond stuff. Perhaps a discussion of how The Spy Who Loved Me was where Moore finally made the character his. Okay, I got that from my DVD doc on TSWLM but it was interesting nonetheless. They talked about how for the first two Moore films they tried to make him a tough guy like Connery and with Spy they finally realized he worked better with suave and droll.
May 14, 2008 at 8:40 AM