Evidence of Things Not Seen 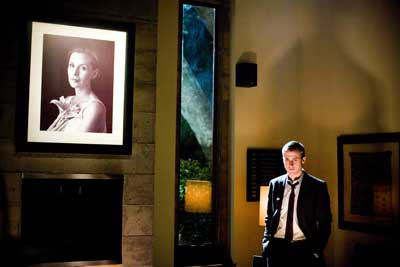 I watched Fracture in a state of half-distraction over a two-week period, alternating between intense focus on a given a scene and catching glimpses of it out of the corner of my eye while doing other work. To admit this is, I know, to violate a cetain cinephiliac code that demands complete immersion in a film (preferably in a dark living room or large theater). And yet how many of the films we blog about were watched in a similar state? There's something to be said for what Walter Benjamin called the distracted view; in "The Work of Art In The Age of Mechanical Reproduction", noting cinema's similarity to architecture, he wrote

Architecture has never been idle. Its history is more ancient than that of any other art, and its claim to being a living force has significance in every attempt to comprehend the relationship of the masses to art. Buildings are appropriated in a twofold manner: by use and by perception-- or rather, by touch and sight. Such appropriation cannot be understood in terms of the attentive concentration of a tourist before a famous building. On the tactile side there is no counterpart to contemplation on the optical side. Tactile appropriation is accomplished not so much by attention as by habit. As regards architecture, habit determines to a large extent even optical reception. The latter, too, occurs much less through rapt attention than by noticing the object in incidental fashion.... 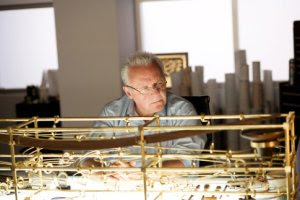 The distracted person, too, can form habits. More, the ability to master certain tasks in a state of distraction proves that their solution has become a matter of habit. Distraction as provided by art presents a covert control of the extent to which new tasks have become soluble by apperception. Since, moreover, individuals are tempted to avoid such tasks, art will tackle the most difficult and most important ones where it is able to mobilize the masses. Today it does so in the film. Reception in a state of distraction, which is increasing noticeably in all fields of art and is symptomatic of profound changes in apperception, finds in the film its true means of exercise.

This viewing state seems especially appropriate for Fracture, a film which builds distraction and architecture into its very methodology. Watching the film, I was reminded of this clip from Los Angeles Plays Itself, Thom Anderson's essay-film about Hollywood, filmmaking and architectural space:

As much as the slippery lawyer played by Ryan Gosling or Anthony Hopkins' ambiguous murder suspect, the architecture of Los Angeles is a strong character in Fracture. It frames the characters in precise horizontals and verticals, or is bent through wide-angle lenses to literally wrap around the action (as in a spectacularly eerie party scene set on a rooftop, where the towers and skyscrapers seem to be shot through a glass bottle). From the moment that the murder occurs in a tasteful modernist mansion in the hills, we are keyed in that the mise-en-scene provided by architecture will be a key element, both exposing and hiding the clues we need to understand the narrative, and offering reflective spaces that alternate between the revelatory and the opaque.

And the figures move through this warped, claustrophobic space in a constant state of distraction. Gosling's character-- a public defender hoping to move to a swanky private firm-- never seems all there even in the courtroom, which is what allows Hopkins' accused engineer to trip up his cross-examination. Gosling looks like Eminem with his shaved head, while he channels the oily charm and quiet intensity of Sean Penn: his darting eyes and constantly cocked head signal a man whose brain is working out three things at once, while not noticing the important fourth thing happening right in front of him. Hopkins is still, almost catatonic in some scenes, but his character never quite seems fully involved in his own trial, doodling in the courtroom and only coming alive in that wicked cross. In a sense, the very stillness of Hopkins is less a means of focusing than another spur to distraction-- it calls so directly on his Hannibal Lecter persona, with its looming forehead over bloodshot eyes, that its visual shorthand means we feel less invested in the how and why of the character, because we think we know him; instead, we're free to notice Hopkins' playful modulation of his Welsh brogue, the way a side-lit shadow dances across his face, what kind of designer sunglasses he has on.

Similarly, the standard operating procedure of the narrative means we're less concerned with the whodunnit than the why. Director Gregory Hoblit doesn't get a lot of critical attention, but he's quietly become a reliable director of solid, character-driven thrillers. From his years as a producer-director on Hill Street Blues and NYPD Blue, he became fluent in law-speak, the everyday rhythms of a police station or a DA's office. He's comfortable in these narrative spaces, and he makes them feel authentically lived-in. There's very little sense of exposition in Fracture, and what we receive seems tossed off, so deeply embedded is it in character motivations or vendettas (watch the scene towards the beginning between Gosling and the boss played by David Straithairn-- Gosling is all bravado, Straithairn all coiled power, and their dialogue exists not as a narrative tool, but an excuse for them to face off like cobras).

Hoblit also does a good job of linking the character's moral quandries to the space of the city in which the story is set, whether it's the Chicago of Primal Fear, the New York of Fallen and Frequency, or the L.A. of Fracture: he chooses offbeat locations, and his films feel like casual tours of the city as much as anything. This concentration on visual detail means a flattening of narrative and a reliance on stock twists. There's nothing tremendously unpredictable about Fracture: of all Hoblit's films, it's the least reliant on the surprise ending. But knowing what's going to happen means we can luxuriate in its stylish craft and smoke-and-neon images. 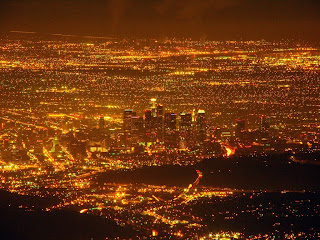 In the end, we care less about the individual crimes or surprise revelations in something like Fracture than we do about the choices the characters make in response; Hoblit has always gotten superb performances from his casts, and his tight framings help us to feel trapped in their often bad decisions, as the city closes in around them, and they stuggle futilely to escape.
Labels: film criticism movies Surrealism Theory TV Walter Benjamin Writing