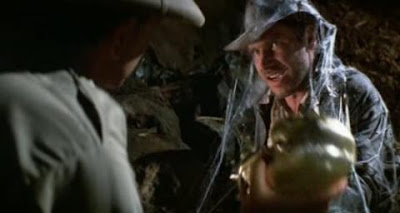 An early-morning dream, just before I wake:

I'm reading Albert Brooks' autobiography. I have no idea if Brooks has actually written one in real life (although he should, don't you think?), but in the version in my dream, he tells a long anecdote about working with Steven Spielberg on Raiders of the Lost Ark. Apparently, Spielberg was unhappy with the screenplay, so as a favor to his great friend, Brooks ghost-wrote seven key scenes for the films (the book never tells what the scenes were about). As I'm reading, the text becomes blurry, but focuses again at a point where Brooks follows up on his screenwriting adventures with this bombshell: he thinks Spielberg wants to cast him in the lead.

Brooks is, as you would imagine, flabbergasted, but not for the reason you'd imagine. He tells Spielberg, "Steven, you know I'd love to work with you on this, but I can't play Indiana Jones! I have this new television series I'm filming!" At this point in the dream, the pages of the book flip forward, and I lose track of my place in the narrative. It takes several minutes of dream-time until I find it again, and a chagrined Brooks understands that he misunderstood Spielberg's request: Steven doesn't want him to play the lead, but instead a "key role" of a government agent (in the dream, I imagine that scene towards the beginning of the film when the two FBI guys come and ask Indy to go after the ark, and assume Brooks would've played one of those parts). According to this mythical dream book, Spielberg really sold the part to Brooks: "It's a key role where you'd own the screen for ten minutes, and really make Hollywood understand what kind of an underrated genius you are. People will walk out of the movie remembering this scene."

I wake up before I can find out if Brooks ever took the part. But as I wake, I'm struck by two things: 1) How, in my dream, Brooks' concern about playing Indy was one of time, not utter inappropriateness for the part: his clueless bravado actually seems like something one of the characters in his films would possess; 2)How cool would it be to see Indiana Jones as played by Albert Brooks?
Labels: Anecdotes blockbusters Dreaming General Geekery Indiana Jones Steven Spielberg

Greg said…
The truck fight could have taken place on a Winnebago and it could've ended with Marion losing the Ark gambling in Vegas.
September 23, 2008 at 8:18 PM

Brian Doan said…
Ha! Yes! And Indy would have a mother complex he hasn't quite gotten over, and would also fight for the love of Marion versus a rival played by William Hurt.

Anonymous said…
Terrific post. This sounds like the beginnings of a longer essay, to be honest--a really good one!
September 24, 2008 at 8:44 AM

bill r. said…
Albert Brooks should play everything, and his first four films should be released by Criterion, and he should write his autobiography as well as a series of novels.