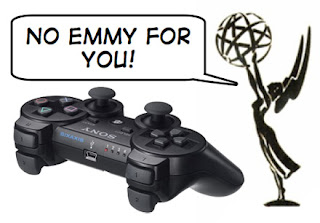 Well, I thought about live-blogging this shindig, but-- aside from questions of time-- the whole thing's just...painful. I like Josh Groban, but don't need to see him play the poor man's Bobby McFerrin by trying to sing a theme song medley (McFerrin could've rocked that puppy with sound effects and voices, but Groban just seemed manic, like he was on a bewildering mix of uppers). Laugh-In is legendary, but watching the cast try to recreate 40-year old magic is just painful and mean, especially with all the lines they're flubbing. The comics are sublime, but they only get to pop up between reality host 'humor.' So, good for long-suffering Stephen Colbert, and perennial winners The Daily Show and Laura Linney, and best of luck to Hugh Laurie and Tina Fey and Mad Men, but I'm not your man here. Instead, I'll turn you over to those master masochists at EW, who live-blog this much more thoroughly than I'd ever want to.

Of course, as I write these words, those wicked Emmyers seduce me with the charming, low-key cool of presenter David Boreanaz. Damn you, Emmy!
Labels: Awards David Boreanaz Mad Men Media TV