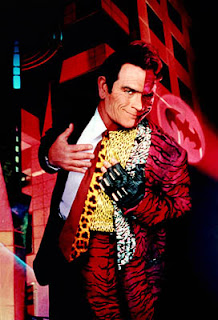 Obama is up by four in a Quinnipac poll, up by five in the CBS News/NY Times poll, and up by six (!) in Gallup tracking-- but apparently, someone forgot to tell Mark Halperin. According to Crooks and Liars, Halperin has declared the Republican candidate the "Winner of the Week" in his Time Magazine "Campaign Scorecard."

(Just out of curiosity, I wonder what it's like in the Time offices now, as Halperin and Joe Klein pass each other in the hall, each eyeing the other warily....Do you think Halperin sees Klein as a traitor for daring to criticize Saint McCain?).

It's schadenfreudenly funny watching Beltway hacks adjust to the constantly shifting realities of this year's campaign trail. Seeing Halperin and Dowd and the others desperately trying to shape the narratives, as they have in past election cycles, is kind of like watching Kyle in the "Chinpokomon" episode of South Park, feverishly trying on one fad after another in order to stay "cool": Obama is a celebrity! McCain is a Maverick! Palin is the Savior! Palin is a Hack!

No links to the Halperin piece (don't feel like giving him hits he doesn't deserve, thanks), but here's the hilariously backwards money quote from his 'analysis,' under the heading "Image" :

McCain's self-engineered and Palin-fueled metamorphosis from experienced veteran to reformer-with-results-maverick has proved effective, if risky. Obama has yet to cement his political persona-- even as the electorate is readying its final judgment.

Remember, stepping into what Digby calls The Village is like entering Alice In Wonderland-- up is down, left is right, and the rules constantly change, based on what the Red Queen desires. Out in the world of the actual electorate, I suspect the final judgment was rendered this week, and proved to be the opposite of Halperin's Tinker Bell-like wishing: Palin's approval ratings now stand at a mind-numbing -4 (how does one get negative points in a poll, anyway? Do dead people hate her, too?), and McCain's gaffes on Spain, on the SEC, and on health care-- and his flip-flopping on regulation and deregulation-- have only reinforced his image as a craven, pandering, mercenary old man who literally won't define "honor".

The media are struggling with what Josh Marshall has dubbed the "Riding The Tire Swing" question-- do they call McCain on his unending stream of cynical bullshit, or remain on the bus and feed him donuts? Halperin's "Scorecard" is one example of this crisis of pseudo-conscience, but it looks more and more of them are coming around to the idea of McCain as "Two-Face," as laid out by the excellent Black Snob:

And for those still on the Swing, let Stephen Colbert gently help you off: