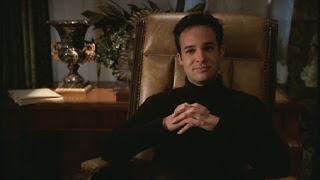 OK, first-- the whole "John McCain-as-the-nation's-prune" riff from Colbert was pretty funny. Not to the heights of previous Stewart/Colbert Emmy face-offs, but funny nonetheless.

Third-- Recount's probably gonna clean up-- it's the Emmys' way of talking about politics without really talking about politics-- but it was predictable that screenwriter Danny Strong would lose out to Kirk Ellis (adapter of John Adams) in the miniseries writing award. I mean, c'mon! Did you really think Jonathan would win an Emmy?? Planets would misalign, and collide! It's just not happening!

(I kid-- I love Mr. Strong, who was fantastic on both Buffy and Gilmore Girls. But really-- the loss has hilarious poetic resonance for me).

Mr. Ellis is this year's Sally Field. His speech went into a harmless riff on how we miss the days "when Presidents spoke in complete sentences"-- and Emmy cut him off, cutting to commercial. I'm sorry, but what a bunch of wimps. How many jokes have been made by both conservatives and liberals about Bush's incoherence in the last eight years? To cut him off that way-- especially after giving him an award for writing about the same ideas, especially when you come back from said commercials with a tribute to M*A*S*H, which embodies the very values of which Mr. Ellis was speaking-- is the height of childish disingenuousness.
Labels: Awards Buffy Media Politics Pop Music TV