Room With A View 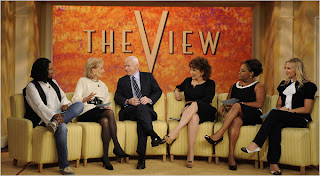 Well, I guess we now know why he hasn't been giving press conferences lately.

I've always thought The View was kind of a silly program, but its hosts did a better job of grilling John McCain than any major news organization has done this year. If Sarah Palin looked, as some bloggers have noted, like a deer caught in the headlights when she spoke with Charlie Gibson, McCain looks like a deer that got run over by a car. Watch the video clips: he's one second away from talking to the women on the panel like they are his wife Cindy.
Labels: Election '08 McCain Politics Random Oddness TV