Slip Of The Tongue? 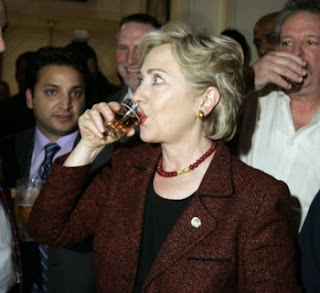 I have been asked repeatedly over the last several days to respond to the idea that Hillary Clinton will soon be dispatched by the Obama campaign to "take Palin on."
The questions are fair, but what undergirds them is an obsession in our popular culture with the "cat fight," an offensive term that describes the spectacle of two well known women fighting with one another...

Don't hold your breath. It's not going to happen.

It's not in Hillary Clinton's interest, and its certainly not in the interest of Barack Obama and the Democratic party... (emphasis mine)

Why Wolfson-- co-architect with the equally odious Mark Penn of Clinton's failed primary run-- is still looked to as a Dem authority is worth asking (especially since he's also now a Fox News commentator). But, if this has even a bit of basis in truth, let me respond and suggest why it's "in Hillary Clinton's interest" to go after Sarah Palin:

First, please note how cleverly Wolfson spins the question into a stereotype: "what undergirds them is an obsession in our popular culture with the "cat fight," an offensive term that describes the spectacle of two well known women fighting with one another..." Meant to bring to mind pictures out of a Russ Meyer movie, what it actually does is reveal the gender bias in Wolfson's own thinking (as firedoglake nicely pointed out, the Republican cries of sexism against Palin are projections, since it's their own side that's leveled the rudest attacks, something our newly minted Fox-head reinforces here).

In fact, what liberals are asking for is not a "catfight," but a simple willingness on the part of Obama's most high-profile surrogate to argue the record of a woman who supposedly "galls" her. Clinton should not be the only person to do this, but as a leader in the Democratic Party, as its most famous female representative, and as the victim of sexist attacks herself, there's no one with a better ethos to do so.

Palin is fervently pro-life. She's in the pocket of Big Oil. Her economic record is atrocious. She's in favor of book banning. She has no foreign policy experience. For God's sakes, she makes fun of cancer victims! She is, in every policy respect, Hillary Clinton's opposite. Going after her on these issues and helping to explain and reinforce the differences between McCain/Palin and Obama/Biden is serving precisely the function that Clinton said she would perform in this campaign, and helps to reinforce her image as a fighter for those working-class voters without a voice.

If a call to Clinton's better nature won't work, here's a more pragmatic reason: backing off Palin now reinforces every paranoid Democratic fantasy that was floated before the convention about your unwillingness to support Obama. It reinforces the image of you and your husband as calculating opportunists who want to see Obama fail. It might end up clearing the path for you in 2012, but it does so in a way that deeply damages your chances by alienating large swaths of voters who will see you as someone putting your own good above the party's. And Jesus, why on earth would you take advice from Howard Wolfson, the 2008 Dem archetype of "Epic Fail"? That makes you look not only calculating, but stupid and desperate.

I hope this is not true. I think there's a good chance that Wolfson is throwing Nixon against the wall just to see what sticks. But if there's any sliver of truth in it, it's time for someone to turn Clinton's plaintive, wonderfully phrased convention question back on her:

Is she in this for her ideals, or just for herself?
Labels: Election '08 Hillary Clinton McCain Obama Palin Politics Random Oddness