What Is Cinema (Blogging)? 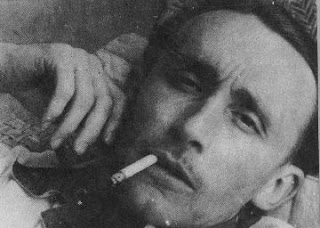 Via Glenn Kenny's blog, I found out that this Cineaste piece-- which I had initially heard about via the comments thread at Jonathan Lapper's blog--is now online for your perusal. It's a piece about Film Criticism in the Age of Blogging, and I highlighted my path of discovery before mentioning what the article was about to suggest that such linkage and wandering is one of the key aspects of said Age: the ability to make connections and follow tangential threads across a series of heretofore stratified subject areas, media and writing styles (like an allusive game of Theory Hopscotch). The Cineaste piece explores the good/bad of this blogging era, and includes wonderful pieces from Self-Styled Siren, Jonathan Rosenbaum, Kenny, Filmbrain, and many others. In his section, Kenny asks if blogging has produced an Andre Bazin, and says he's not certain (although he offers up David Bordwell as one possible answer; I might have offered up Girish, who seems much more in tune with the poetics and constant questioning of Bazin's best work). But what the best blogs suggest is that this question is something of an anachronism, as odd as comparing Cahiers du Cinema and theater criticism (and then wondering why the former isn't like the latter). For me, the model for blogging (filmic or otherwise) is less writing (especially the essay) than it is dance or pop music. It crafts a duet between writer and text, and between posts and comments, that comes at the reader as a series of riffs and improvisations, or imaginative choreography between ideas and texts: at once analytic, conversational, quotational, romantic, angry, searching and witty. If it works, the concept will eventually give way to the groove.
Labels: Andre Bazin Blogging film criticism Glenn Kenny Jonathan Lapper/Greg F. movies New Wave Pop Music Self-Styled Siren Writing

The Siren said…
Thanks very much for the compliment. Your description of blogging as dance or pop music is beautiful and inspirational as well. I wholeheartedly second your thoughts about Girish. Seeing the wide appreciation for his writing and the wonderful space he's created for discussion was a great pleasure.
September 8, 2008 at 10:18 PM

Brian Doan said…
Thanks, Campaspe! Your kind words mean a lot. I loved what you wrote in the CINEASTE piece, and I also wanted to thank you for your recent post on THE RED SHOES, one of may favorite films. Isn't GIrish great? So thoughtful and generous in his writing.
September 9, 2008 at 3:07 PM

Greg said…
The best thing about the whole piece was that part where my name was mentioned by the Siren. I mean, everyone agrees that was the best part right? If I didn't already swoon over the Siren I definitely would now.
September 9, 2008 at 11:14 PM