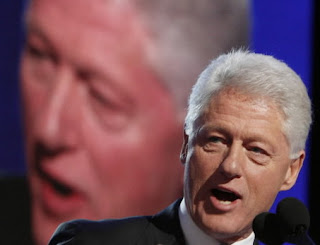 Josh Marshall has been all over the fakery of McCain's 'suspended' campaign (I linked to his most recent post on the subject, but there are others all over the site), and I was also struck by this post by Steve Benen about McCain's gambler persona (really, if you're not reading Benen this political season, you're denying yourself some of the best commentary on the web, as well as exhaustive links to other news). Taken together, the blatant lying and the needless, reckless risk-taking more fully explain (for me, anyway), why Bill Clinton would be out on morning talk shows today defending McCain's call for canceling the debates (h/t to Andrew Sullivan for the link).

It's not just that McCain spoke at his Global Initiative this week (where Bill gave him another needless tongue bath); it's not just that Obama defeated HIllary Clinton in the primaries (although I suspect that's a big part of it); it's not just that Bill Clinton, for all his staggering gifts, is an insecure narcissist who bristles at the notion of a younger, charismatic candidate taking his place as party leader; it's not just that Clinton may feel lingering bitterness on being called on the kinds of racially-tinged crap he and Hillary Clinton tried to pull on Obama in the primaries (ironically, the same kinds of racially-tinged attacks that were used on him for years in Arkansas and Washington, as documented-- again, note the irony-- by Cilnton campaign staffer Sidney Blumenthal in his book The Clinton Wars).

It's that Bill Clinton probably sees in John McCain the same kind of egocentric, self-destructive, self-righteous gambler, willing (no, needing) to continually raise the stakes in order to come out looking even more heroic (Marshall's TPM staffers describe it as McCain riding into Washington on a white horse to save the day). Party be damned: this is a kindred soul, and Bill can't help but reach out to him. At least when he was President, Clinton could channel those gambling instincts into policy maneuvers that benefitted his constituents (as when he made Newt Gingrich blink in '95 over the government shutdown). Now that he's out of the White House, he still hasn't figured out how to control his impulses, which makes him a dangerous surrogate to have out there.