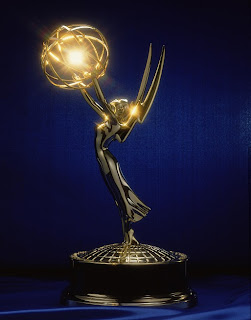 The picks thus far have been predictable (Jeremy Piven? Yeah, that was cool-- three years ago), but one thing is certain-- reality TV is dead.

Oh, it will continue to exist, haunting us forever with biddying nannies, conniving island-dwellers and undereducated parents and their overly bright children (or whatever the hell Jeff Foxworthy is hosting these days). But what little credibility it had is shot, blown away by Jeff Probst, Heidi Klum, Howie Mandel, Ryan Seacrest, and that Dancing With The Stars guy: the reality hosts the Television Academy chose (in a moment of drunk dialing, no doubt) to host this evening's festivities. It was meant to be their moment of triumph, their coming out party as legitimate parts of the television landscape, but their utter lack of grace, humor or charm-- and their completely narcissistic, aren't-we-being-funny smugness-- only exposed them as eternal, D-list also-rans. Their clumsiness has been thrown into relief by the string of genuinely cool, funny people-- Tina Fey, Amy Poehler, RIcky Gervais, Conan O'Brien, and the sublime Steve Martin-- that have MC'ed individual moments during the show. Why were none of these people chosen, since all of them are more talented-- and arguably "hotter" in terms of popularity-- than any of the reality folks?
Labels: Awards Media TV