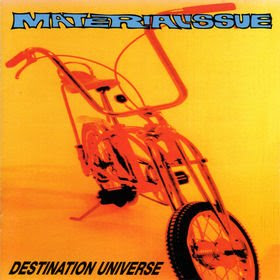 With its moseying bass line and rueful lyric, Material Issue's "Next Big Thing" is a country music song in power pop clothes (a feeling enhanced by Jim Ellison's twangy vocal). The best track on their 1992 release Destination Universe, "Next Big Thing" rises out of a bed of Byrdsy guitars like a whiskey-stained apparition, a near-perfect 3:17 slice of character, atmosphere and regret. Its melancholy, ironic tone artfully deconstructs the very alt-rock world into which the Chicago band found themselves thrust after the success of 1991's International Pop Overthrow. 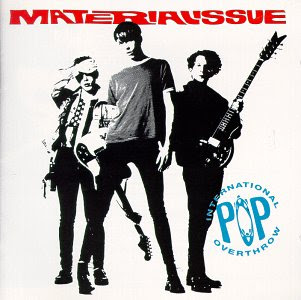 That record-- a bright, shiny, modish alternative to the grunge rock that was about to overtake American radio-- more readily displayed the influence of British bands like The Kinks and The Jam: its yelping vocals, hopscotch drum patterns, screeching guitars and McCartneyish lead bass carried the listener into a Technicolor world of teen romance and mad love whose darker undertones were only apparent on repeated listenings. Lead singer/songwriter Jim Ellison clearly knew his pop history, and artfully reworked its tropes for a college rock audience.

Destination Universe's first single, "What Girls Want," was cut from the same cloth as IPO singles like "Renee Remains The Same" and "Valerie Loves Me": it's ironically cartoonish, and layers self-aware gibberish lyrics on top of feedback-heavy guitars and a distorted rhythm section. Ellison sounds like he's yelling the vocals into a wind tunnel, with a big grin on his face. It's a lot of fun, but "Next Big Thing" feels more like the album's heart.

The song opens with a repeated guitar part that echoes the opening of the La's "There She Goes," followed by a heavy, insistent bass that pushes the song through the door: its ranging around in the lower octaves will give the song both literal and metaphorical weight, as if acting as the lighter-than-air guitar's conscience.

Like any good country song, we start in a bar, the narrator's short phrasing keying us in to the direct manner that will be his romantic doom; as the guitars swirl in hypnotic repeated phrases, pop music also plays a central role in the story:

So I bought her a round and she pounded it down
let out a laugh like a freight train
We exchanged small talk
"Doesn't it feel like rain?"

These two hipsters flirt, but can only do so by ironically adopting the language of the pop culture they disparage:

Drinking and flirting open up to more revelations, the first that the narrator's dream girl isn't as independent as she seems:

She told me her roommate was gone for the weekend
borrowed her car and took off with her boyfriend
They'd be married soon
was it December or June?

She was an artist with a two bedroom apartment
Her dad kept her going on a weekly allowance
She'd be graduating soon
Was it December or June?

Place is evoked so well in the band's writing, as tiny character details blend with the melody and instrumentation to recreate the atmosphere of a wet afternoon in a Bucktown bar. The lyric takes a serious turn in the next verse, but it wouldn't work without Ellison's eye for the makeup of crowds, and his simultaneous sympathy and revulsion:

And I thought to myself you're just like everybody else
Standing at the station, but missing the train
I turned to catch her expression
She walked back home in the rain.

His attraction broken by misperception and pretension, the narrator then adopts his would-be lover's ironic phrasing, finding in it something more heartfelt (and impossible to actualize):

Like that lover walking out of the bar on a rainy day, this was the band's goodbye to major mainstream success: Destination Universe and International Pop Overthrow had been hits for Mercury Records, but when their 1994 release, Freak City Soundtrack, sold less than 50,000 copies, they ended their contract with the label. In 1996, Ellison killed himself through carbon dioxide poisoning.

Reading about the band online, I found out they were on the late, great MTV alt-video show 120 Minutes with the Replacements in 1990. It made perfect sense: like the 'Mats' Paul Westerberg, Ellison had pop gifts that fit uneasily into the cultural moment in which he found himself (whether the defining ideology was punk or grunge), and both explored the ups-and-downs of everyday losers with a poet's heart. 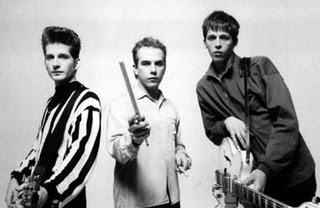 "Next Big Thing" is so smart about fading fashions and group think that it seems to predict both the band's eventual dissolution and that of the alt-rock scene itself, which would find itself displaced by the reactionary folk-rock of Hootie and The Ginflowers not long after Material Issue were dropped from their label. But as the song suggests, such an end isn't all bad: what matters isn't the lasting success, but that fleeting moment when the song comes on the juke box, and for a moment, anything seems possible-- even love on a rainy day.
Labels: i-tune Material Issue Paul Westerberg Pop Music Writing

Material issue did 2 and 1/2 good power pop/bubblegum records. They won my heart at a radio station 'mega-concert' in about 1992. When they showed up at the main gate screaming acting goofy (drunk) and shouting "Material Issue" hoping for some applause. No one applauded, but my friends and I joined in the general silliness, admitted we liked their song (the only one I had heard played on local indie radio).

They gave us a few Olympia beers from the case they were carrying in with them and I decided then I was a fan.

Brian Doan said…
Pat,
Well, I wish I could claim "Ginflowers" was a really clever pun-- "See, I blended the names together!"-- but of course, it's a typo. I meant "Wallflowers," and like The Gin Blossoms too much to lump them in with Hootie. Thanks for the catch.

Great story about meeting the band! I think that really endears me to their music even more, actually.
September 16, 2008 at 9:02 PM