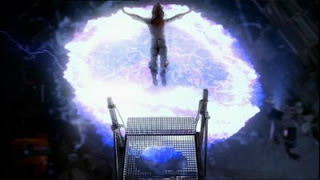 Although he's gone on to success as a composer for motion pictures, I'll always think of Christophe Beck as Buffy The Vampire Slayer's secret weapon. Critics and fans have rightly noted Joss Whedon's witty dialogue and cinephiliac direction, and the superb cast (and a few of us also dig the yeoman's work done by cinematographer Michael Gershman, who shot the show for five years and made it look much moodier and more epic than a program shot on super-16 otherwise might). But all of this wonderful material wouldn't resonate nearly as much if Beck didn't bring his own sonic gifts to the proceedings; his work on Buffy combined the best elements of Ennio Morricone, John Barry, Bernard Hermann, and other masters of thriller composition, finding just the right line between comedy and melodrama and embodying Barry's description of what a good score should sound like (he was speaking of his work on the James Bond films): "No matter how ridiculous the action on the screen, always make it sound like a million bucks."

Beck's Buffy work was finally released on CD yesterday: Buffy: The Score pulls together 29 tracks from Beck's Emmy-winning work on the show between its second and fifth seasons (it's available on I-Tunes, too). Even now, listening to the disc as I type this, I can see the scenes unfolding in my head: Angel and Buffy's battle to the death at the end of Season Two ("Massacre"); the last, sad moments of Jenny Calender ("Remembering Jenny"); the floating menace of the Gentlemen from "Hush" ("Demon Got Your Tongue"); Buffy's dive into the void at the end of Season Five ("Sacrifice"). Some of Beck's material was released piecemeal on two other CDs (the soundtracks to Angel and Once More, With Feeling), but it's nice to have an hour's worth of his best moments on one collection, a shimmering and shiver-driven sonic playground full of vampire and slayers, longing and lust, fear and hope-- the various dualisms that Whedon's work always explores, and that Beck's scores nicely embody.
Labels: Buffy Christophe Beck Joss Whedon Music TV